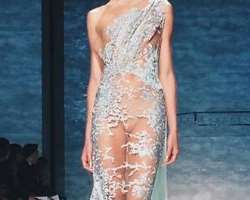 A scene was recently created at the gate of one Church located at one of the High brow areas in Abuja recently. A young woman who felt that she was unjustly prevented from accessing the church to worship was furious and trying to school the usher and gate man in her own theology. But the two personnel at the church stood their ground and insisted that they were just doing their job. The crux of the matter was the appropriateness or otherwise of what she was wearing. The issue of dressing has always been a delicate one through the ages.

The revolution in fashion and clothing industry is absurd considering what, presently, fashion is turning out to be – a celebration of nudity. I will use fashion here to mean clothing fashion and method of dressing which, today, is a multibillion dollar industry. The notorious wardrobe malfunction incident is not strange to many, but ward ropes have continued to malfunction in the streets, work places and even churches intentionally or unintentionally.

Well, the story and history of fashion is an interesting and complicated one. It is inseparable with history of clothing and civilization which draws from social, cultural and religious exigencies. As one of the basic necessities of life, historians believe that men started to cover themselves using various materials (leaves, wood, hides and skins) as a means of protecting themselves from the elements of the weather and also covering sensitive organs which is what distinguishes human from other creatures. This striving to cover the body continued to the middle ages when there was tremendous progress in materials and clothing technology. Also clothing or dressing took on cultural and religious significance and the notion of proper covering, decency or ideal dressing developed. It was due to the inadequate clothing (loin cloths) which covered the ‘basic nakedness’ that made the early Europeans that made contact with the African continent think that the people were uncivilized. Africa has continued to be in a cross road when it comes to appropriateness or otherwise of authentic African fashion or manner of dressing especially in an era of social media where information is just at ones finger tip.

A look around shows how preponderance and pervasive fashion can be –from the ludicrous to the bizarre and the theme is the same – inclination to nudity. The media and advertiser’s exploitation of sex for marketing purposes have contributed to the abysmal sense of fashion in which decency has been thrown to the dust because of self glorification and unbridled consumerism. The body is seen just as any other commodity. Ladies aspire to be superstars or celebrities and one of the obvious qualifications, unfortunately, is appearing barely nude in the name of fashion. Ladies low-rise jeans that reveal the G-string assaults our sights and a dressing style that developed in the red-light districts and which was only suitable within the precinct of the sex trade, have now become common and even some places of worship are not spared. Women and girls dressed in cloths cut way above the knee see - through fabrics and poking breast blouses throng these places in sanctimonious show of holiness. I do not want to go into the argument or debate of ‘intent’ or ‘mind/body’ dichotomy but a young lady who ‘dresses to kill’ and walks into a church must be very clear in her intent. I also do not want to go into the debate of “I am comfortable in this” for I have seen a number of people struggling desperately to adjust what they are putting on because it was way too short or it was seriously impeding movement. Where lays the comfort? Could it be in the attention attracted? One church has a bold inscription “Indecent Dressing Not Allowed in Church Premises” on placards foisted in all the major entrances and doors of the church. This is a testament to how serious the problem has been and how low we have gone in our sense of morality.

Boys and young men are not left out in this culture which has similarity in origin with that of the female. The sagging fag now that leaves boys dropping their trousers almost to knee level exposing their inner pants or boxers originated in jails in the United States of America where belts are prohibited and inmates are usually given large pants that often dropped below their waist. Later sagging took on the colouration of protest cum revolt and eventually American rappers like 50 Cent popularized it. Besides, it has become fashionable for young men to bare their chest or biceps to show their machismo after months of walk-out or to display tattoos. This fashion is also gaining ground especially among teenagers and young men here in Nigeria.

It is sad that most cherished cultural attires and fashion that are the identity of the various traditional groups in Nigeria today are the worse off for this invasion. Customs and traditions are dynamic but when cultural systems of a people become annihilated in a flash, there is a problem. More thought provoking is that our fore fathers struggled to cover as much as they could despite their limitations, but today we are struggling to expose as much as we can in spite of all the clothing technologies. Isn’t it crazy? Could it be that our fore fathers in their loin cloths in the early ages were more civilized than us in the 21st century in our bikinis and revealing cloths? Is it a case of history repeating itself? The German city of Max-Joseph Platz on June 24, 2012 witnessed 1700 stark naked men and women in a chorography of same. The occasion was the replication of scenes from Richard Wagner’s opera ‘The Ring’ for photographer Spencer Tunick. It is more worrisome when some international broadcast organizations aired unedited this spectacle repeatedly as news. Some see this as one of those weird acts in theatre but this has more far reaching implications. It is a dress-rehearsal for ‘nude right activists’ to push for constitutional recognition in future. We are all witnesses of the gay right campaigns and how, today, African countries are being intimidated to pass gay right legislations. Who will be surprised if it is ‘Nude Right Legislations’ tomorrow?

The whole entertainment and show business has become so ‘sexed –up’ and minors are been exposed to what ought to be adult materials too early in life and consequently, the high incident of precocious actions and tendencies among children. The erosion of traditional mode of dressing does not just happen. It is driven by neo- colonial fixation hence a society that believes that traditional outfits is not ‘sophisticated’ but ‘local’. There is nothing wrong in dressing to suit a particular situation or occasion, but where children are made to believe that proper dressing is western attires only, there is problem; just like increasing number of children in Nigeria cannot speak their indigenous language. This further compounds the problems of loss of identity.

Women and young men parade the streets exposing what they ought to cover and this begins to raise questions on the limits and boundaries of the law in relations to indecent exposure. A decent society is not always one that dances to the whims and caprices of base innovations, but one that thinks of what can be of good to the society as a whole. Freedom, after all, is not sacrosanct. In England and America certain acts prohibit indecent exposures in public places in some states. Freedom is enjoyed in as much as the public good is not harmed.

Oliver Ejike Uja is a research officer and lives in Abuja