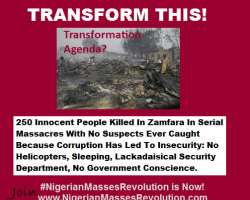 Everywhere we look in Nigeria today and see death; it is not an accident. It is the price the people pay for the corruption of the government. Everything in life has its consequences. The consequence of intractable government corruption is death.

When helicopters are not bought for the police force: the consequence is death. 250 people like you and I died in Zamfara state. There was no helicopter to pursue the killers. There has been no police helicopter to pursue this same set of killers after each killing they 'enjoyed' for the past three years. The police do not have choppers as obtains in every decent society because the government has stolen the money for the helicopters and saved it in accounts for their children who they assume will be hopeless in the future—unlike us who happily work for ours—and will need this money to live.

The government steals billions of dollars that should have bought thousands of choppers for police in all states or hundreds of thousands of drones. CBN gave the police money for choppers, the police tried to deny it. This means they stole the money. The government steals money that should be used to equip our great military properly to bring an end to unscrupulous terrorists, without soldiers having to lose their lives.

We the people pay the price for the government corruption. It is also a consequence; the consequence we pay for allowing the government steal limitlessly, and having not yet revolted. This is why now we revolt.

When the government steals money; to steal money they have to bribe many unworthy people in the process. They have to placate and please many co-conspirators, many fellow thieves. The consequence of this is that the society feels the presence of money in the hands of the unworthy. Money flows from one thief to another crooked friend and then to terrorists hands. Guns are bought. Thugs are hired by the politicians and their friends. Sometimes terrorists are paid with this stolen money. Terrorists terrorize the masses. The consequence is deaths. We the people pay the consequence of the stealing of public money as a consequence of our silence, of our delay to revolt. This is why now we revolt.

When money is stolen, the police are not paid salaries commensurate of their task. Police are not paid regularly and underpaid. The police spend their time hustling for tips instead of in training and in pursuit of criminals. The police never investigate cases, they never track criminals; and when they do arrest suspects, they release them for some money. The consequence of the money that could improve the security services being stolen is poverty of the police force and deaths of the people from cheap criminals who would not last a day on American streets. We the people die as a consequence of our tolerating a thieving government. The consequence of our inaction is death.

When the government steals money, they pack our unemployed youth into stadia without proper consideration. They humiliate and kill our youth. There is no consequence for their actions because thieves are friends and protectors of thieves. The consequence of their stealing is the martyrdom of our most precious and most vulnerable. The consequence of our failure to revolt is our death and pain.

Today Bayelsa state is the most polluted piece of land on this planet. Vanguard of April 2nd reports that there are 40 oil spills in Bayelsa every single month! This is poisoning and killing our people. Our poorest people, the defenseless, those not like us who can at least tweet reactions about their suffering. Have you seen the type of mud and thatch houses being burned in the north? Did you know Nigerians still live in those? These people have gained nothing from the Nigerian equation, but are dying as a consequence of looting of wealth they do not even know about. Death is the consequence of government looting. And government looting is the consequence of our delay to revolt.

Are you seeing all the kidnapping, ritual behavior, the massacres, the return of Nigeria to barbaric ages? This is the consequence of chronic stealing and government promoted vain glorious culture of killing to steal and stealing to kill. This is the consequence of our waiting for change instead of going for change. 168 million of us tied down by a few and being turned into sick psychos our very selves.

Do you want to die? Do you think you cannot be the next one to die as many of us have died in villages across Nigeria? God forbid.

The consequence of chronic government looting is the revolt of the people.

Join the revolution: http://NigerianMassesRevolution.com This is the least, most simple and most powerful thing we are obligated to do. This simple thing will change everything.

A few hundred greedy Cabal can no longer hold down and kill millions of us. Mark your independence from the Cabal. Nigeria's 2nd Independence: October 1st, 2014, by God's mighty grace.

Nigeria Will Be Free!