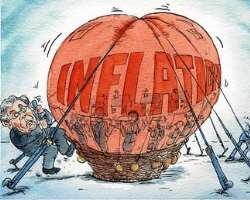 Gross Domestic Product (GDP) is the total market value of all final goods and services produced in a country in a given year. GDP is the world's most popular market indicator! That China is the second largest economy in the world does not mean that of its citizens are enjoying life to the fullest.

According to the Chinese Ambassador to Nigeria, Mr. Deng Boqing in the article he wrote for Thisday Newspaper of November 3rd 2011, which entitled: “The Inside Story of China's Rise”. He said: “It's easy for people outside China to see the growth as the big and strong side while we, the insiders have seen the difficulties as its small and weak side.

China's per—capital GDP in 2010 just exceeding 4,000 US Dollars, ranks the 94th in the world and is less than a third of Equatorial Guinea's and a tenth of US's”. “The problem of uneven development is prominent with expanding gap between the West and East. There are still more than 130 million Chinese people living on less than one dollar a day and 10 million people having no access to electricity”. GDP is a market indicator which Simon Kuznets, an economist helped to develop! It has withered every challenging storm in the past, but, I doubt if it could repeat same this time around, looking at the personalities and the substance behind the new challenging concept, the Social Progress Index (SPI).

In April this year, a Harvard Business School Professor who helped to develop the now popular Corporate Social Responsibility (CSR) concept in the corporate world; Michael Porter blazed another trail at the governmental level. Porter and the Social Progress Imperative designed the Social Progress Index (SPI), a concept that will rival GDP.

According to Porter, Social Progress Index is the capacity of a society to meet the basic human needs of its citizens, establish the building blocks that allows citizens and communities to enhance and sustain the quality of their lives, and create the conditions for all individuals to reach their full potential” He said: “It is ridiculous to be measuring success purely on the idea of growth at a time when countries are facing massive social upheavals”. Throwing more lights on how SPI differs from other known economic and development index, Mr. Porter said: “While there is a strong correlation between SPI scores and Human Development Index (HDI) scores, there are significant differences in social progress among countries with similar HDI, especially for high-and medium-income countries, largely due to poor performance on environmental indicators—Tripple Pundit.com. The SPI index has 52 indicators in three dimensions; there are, Basic Human Needs, this model checks whether a country provides for its citizen's most essential needs. These include nutrition, air, water, sanitation, shelter etc. The second model is Foundations of Well being, this looks at access to basic knowledge, health and wellness and ecosystem sustainability. The third and final model is Opportunity. This looks at personal rights of citizens, access to higher education, equity and inclusion. The first ever results of SPI was released in April with Sweden taking the first position, followed by the United Kingdoms. Third and fourth positions went to Switzerland and Canada, while Germany came fifth, the United States took sixth position.

Going by GDP, the French economy contracted by 0.2 percent in the first quarter of the year 2013, while the German economy grew by 0.1 percent for the same year. But, Nigeria's economy grew by 6.56 percent for the same first quarter of the year 2013. Now, can we compare the French Standards of living to Nigeria's standard of living? Despite the fact that France slipped back to recession, it is still the second largest economy in Europe after Germany, and the fifth largest economy in the world, yet, it's growth contracted by 0.2percent, why Nigeria that grew by 6.56 percent has a backlog of youth unemployment rate, most of its population live on less than $2 per day. Is Kuznets GDP making Porter's SPI a hero? Only time will tell!

In 2009, former French President, Nicholas Sacoxy, advocated for the inclusion of happiness, human rights etc to indices used in measuring the strengths of economies. His call may be more meaningful now, especially in developing countries! Situations like this was why a former Nigerian leader dismissed a report that said, most Nigerians live on less than $1 during his reign. His logic was hinged on the fact that, most Nigerians live in rural areas where farming is their major occupation, and that, the values of the food they eat from their farms cannot be quantified in monetary terms.

In Forbes Magazine's article last year, Qatar was named as the richest country in the world with purchasing power parity (PPP) or GDP per capital of $88, 000; yet, most of its population according to the article is poor. Even with little population of about 1.7 million and huge revenue accruing from its oil and gas industry, the wealth is no circulating among the peoples! Should the world continue with GDP?

Comrade Edwin Ekene Uhara is an activist and public affairs commentator. He is also the National President of Young Nigerians for Change.