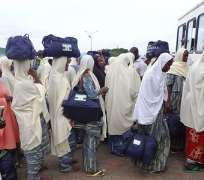 SAN FRANCISCO, September 27, (THEWILL) – The government of Saudi Arabia Thursday deported another batch of 512 pilgrims to Nigeria, a day after deporting 171 women.

The pilgrims, mainly women from Kano and Jigawa States, arrived at the Mallam Aminu Kano International Airport, Kano around 6:13 pm on board a Meridian Airline plane. Those from Sokoto and Zamfara were also on board.

The Saudi authorities denied them entry because they were not accompanied by their men as demanded by the rules of pilgrimage to the holy land.

An official of NAHCON who spoke to THEWILL anonymously said Kano had about 200 women, while Jigawa accounted for 300.

Some of the women who narrated their ordeals said they spent between four and five days at the airport, sleeping on bare floors and went without food.

‘’This is the most dehumanizing situation I have ever experienced in my life,” one of the women said.

Another woman, Binta Malami from Kano said she went to the Holy land with her Muharram (Husband) but she was denied entry because his name did not correspond with the name written in her passport.

Also speaking to newsmen, Alhaji Musa Sayyadi, the only male pilgrim who was deported along his wife said he decided to follow his wife because of the inhuman treatment meted to the women at the airport.

THEWILL saw the Amirul Hajj of Jigawa State and Emir of Kazaure, Alhaji Najib Adamu, and the Executive Secretary, Kano State Pilgrims Welfare Board, Alhaji Laminu Rabi’u at the airport to welcome the deportees.

There are at least another 300 persons still in the custody of the Saudi Arabian government.

The Vice President of Nigeria Namadi Sambo, a Muslim from Kaduna State had Wednesday met with the Saudi Ambassador to Nigeria over the issue.