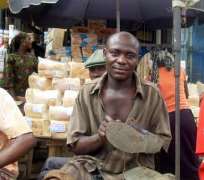 Nigerians have witnessed several bomb blasts. This is most serious. And it is scary. The president said he will no longer focus on creating jobs because of security challenges confronting the nation. One would have to check the book of chronicles of presidents to find out what else presidents create, if they don’t create jobs. President Goodluck Jonathan was at the 60th National Executive Committee (NEC) meeting of his party when he made the pronouncement. Actually, there were two things he did that time: Nigerians should not expect him to fulfil his election promises, as well as implement his party manifestoes, he had said. Two, he compared the performance of the current administration and that of his party with the worst case possible, not the best, and scored himself a pass mark. One could take a closer look the latter, for starters.

“We know what is happening in other African countries,” the president had said. “If the ruling party over-intimidates and over-imposes, using the weight of the Federal Government and the citizens revolt, it will weaken the political system and create confusion and instability. But the PDP, even though, we control the Federal Government, we operate a system that even the opposition, even fly higher than us. They abuse us more, but we allow it. And it is the way PDP is handling the affairs of the country that is stabilising democracy in the country.” Good. But placing that side by side with other African countries is not. One would assume a look at advanced democracies is where to draw comparisons, and thus aim for the best for Nigeria. The president went on to lament the loss by his party in some states during the general elections. And he realised everyone could be swept away if his party exerts itself, and he therefore made a promise: The party would not use its federal might against other political parties because “we witnessed what happened in the first republic.” It is good politicians are proclaiming that they have learnt from the past. But then, even all of that amounts to veiled threats, a reason Nigerians would want to be more on their guard. It is only here leaders say they choose not to rig elections and expect anyone to shower them with praises. Surely, Nigerians were not among those that must have clapped that time at the 60th meeting where their president renewed his vow never to rig elections, only his party members were.

And there is the second issue. Development plan for the country that the president said is scuttled as things stand, because of security challenges. “During [presidential] campaign, our emphasis was more on job creation, power, but now what worries us most is security. This is because you must be alive before you will eat food.” He gave a description, too, that security is “very, very fundamental. If you are not safe, you can’t even think of hunger because a dead person does not need food.” There is no point stating that this is an oversimplification of a complex issue, because thorough thinking of issues involved would show that what the president said he would be too preoccupied to focus on, is one of the remote causes of the current security challenges. The not so disciplined tend to find negative jobs for themselves, when positive ones are not available.

Nigerians would recall their leader had once announced earlier on that the plan for introduction of palliatives measures after the removal of fuel subsidy was scuttled. Discerning minds are taking note of what their leader said but later took back. If an analyst among the president’s men does not take note of such as a sign of weakness, of lack of a well-articulated plan before policy pronouncements were made, he will take note of nothing. Now the issues are simple: Does anyone consider the implications of statement such as this on Nigerians? Does anyone consider the implications of this on the enemies of Nigeria? Here, there is a need to do a comparison in order to see, if the president and his political team that seemed to have agreed with him that implementing party manifestoes would neither be their focus nor job creation be their worry, have concrete reasons.

Nigeria would not be the first country to have security challenges. The September 11 attacks transformed the first term of President George W. Bush and led to what he has called the Global War on Terrorism. Many were never so sure if the campaign to deal with terrorists should have been called, "war." But the US government increased military operations, introduced new economic measures and put political pressure on groups it accused of being terrorists, as well as on governments and countries accused of sheltering them. It indeed went to war in October 2001 in Afghanistan in order to remove the Taliban regime which harbored al-Qaeda and to capture al-Qaeda forces. Bush did not get his prize –Osama Bin Laden - for the next seven years he stayed in office, President Barack Obama who succeeded him did. The aftermath of the terror issue for the US was far-reaching. The nation was shaken to its root. There were, of course, the security implications, economic and political implications, as well as having to expend resources on the international scene to achieve security for its citizens. Yet, although the economic situation kept rate of employment relatively high in the Bush year’s, it was nothing comparable to what obtains in the Obama administration that is not as threatened, security-wise, as Bush after September 2011.

One thing that could be stated is this: The kind of statement attributed to President Jonathan, is to say the least, daring, and it can only be made in a nation where politicians depend of everything other than the votes of the electorates to remain in office. In the US, no sitting President since Franklin D. Roosevelt in the 1930s and early 1940s has won re-election when unemployment was over 7.2% on election day. In fact, the challenges that Roosevelt met when he arrived office was such that Americans were committing suicide. Then existing economic and financial challenges at the time were security threats to his nation. One of the earliest and most successful things Roosevelt did was to put his citizens back to work; it was one of the reasons he remained the only American president elected four times into office. Yet, Nigeria’s president said job creation can go to sleep. This is a depressing statement, scary in a nation where citizens keep hoping that the government would do all it can to create room for them to have jobs. And this is a pronouncement that can serve to bolster the resolve of terrorists, knowing they have succeeded in distracting the government, which was their aim right from the word go. Does any Nigerian recollect his president saying during his last media chat that not travelling out of the country to attend an earth conference in Rio, Brazil, would send wrong signals to terrorists and investors?

Now what impact would this kind of declaration, that the nation is more preoccupied with chasing terrorists rather that creating jobs, have? It is more serious than not travelling to Rio. Someone may want to come out and explain to the nation what the president meant later. But should such pronouncements have been made in the manner they were in the first place? Some of the landmark and befuddling pronouncements that are sent to Nigerians are getting too many. Such can leave the populace apprehensive, so they ought to be better packaged, refined, and delivered, even if they are the reality, and the president is saying things as they are. In any case, the president’s immediate predecessor did not, in the face of challenges posed by Niger Delta militants, stop to make efforts towards putting Nigerians to work. He too has no reason to tell Nigerians that he would neither implement his party manifestoes, nor do all that is necessary in order to create jobs because of security challenges.