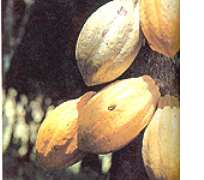 A fall in commodities prices triggered by the global financial crisis has brought Nigeria's cocoa trade to a rather slow pace, with farmers refusing to sell at the rates being offered by buyers. Recently, Business Day reported how the global financial crisis has slashed cocoa grinding in Nigeria, and there have barely been any exports to Europe in the last two months.

Nigeria has the capacity to process around 100,000 tonnes of cocoa per year, but most of its eight functional plants are operating at below 40 percent capacity due to poor infrastructure, high costs and multiple taxes.

According to Felix Oladunjoye, Cocoa Processors' Association of Nigeria (COPAN) secretary general, “the global crisis has crippled business; almost everything is at a standstill.”

The Nigerian cocoa economy has a rich history and the contributions of cocoa to the nation's economic development are vast. In terms of foreign exchange earnings, no single agricultural export commodity has earned more than cocoa. With respect to employment, the cocoa sub-sector still offers quite a sizeable number of people employment, both directly and indirectly.

In addition, it is an important source of raw material, as well as source of revenue to governments of cocoa producing states.

Because of its importance, the recent Federal Government's concern of diversifying the export base of the nation has placed cocoa on centre-stage as the most important export tree crop.

About 95 percent of cocoa output from Nigeria, the world's fourth-largest grower, is shipped to chocolate makers in Europe.

According to Oladunjoye most cocoa processors are not producing, the few that are processing are doing so epileptically because there is no demand for processed products in Europe.

“The few shipments of cocoa products from Nigeria (butter, cake, liquor and powder) were based on contracts signed before the crisis. But they were delayed for various reasons. There have been no new contracts since October. Importers are not importing because they can't get credit from their banks, and factories are closing down; nobody can say he is covered,” Oladunjoye said.

It can be recalled that in 2005, Federal Government launched an ambitious cocoa revival campaign to increase production, local processing and domestic consumption of cocoa products. But incentives from the government are said to be often delayed.

According to Oladunjoye “there had been no significant increase in domestic consumption in the last three years to make up for the lull in exports since October. There is really nothing we here can do about the global crisis but wait until the various bailout programmes initiated by Western countries begin to manifest.” According to him,

Nigerian cocoa grinders will pay nearly $5 million in tariffs this year to export to Europe because government refused to sign a new trade deal with the European Union, the main processors' group said recently.

“Nigeria's refusal to sign economic partnership agreement (EPA) has put us at a great disadvantage because we can't compete with exporters from Ivory Coast, Ghana and Cameroon who don't pay export duties.

If the government does not do something to cushion the effect of the huge losses we are incurring, most cocoa factories will close shop in the next two years because there is no way they can survive, ”Oladunjoye added.

Cocoa buyers and growers had earlier noted that bean quality had improved greatly recently, with mould levels down to less than 5 percent in some areas in the southwest region, from about 30 percent.

The upcountry price of graded cocoa beans certified fit for export, by government produce inspectors fell 18 percent to 230,000 naira per tonne in the southwest and 200,000 naira in the southeast, in line with the global trend, buyers noted.

It can be recalled that the European Union (EU) imposed tariffs on cocoa products and other exports from Nigeria in January after Africa's top oil producer, which is also the world's No. 5 cocoa grower, declined to sign an economic partnership agreement by a Dec. 31, 2007 deadline. Nigeria held fast in its refusal to sign an EPA, which the EU demanded to make its long- preferential trade with African, Caribbean and Pacific former colonies compliant with World Trade Organisation (WTO) rules.

Industry experts say that this has badly hit the Nigerian cocoa sector's ability to compete with regional rivals Ivory Coast, Ghana and Cameroon, all of whom signed interim trade deals with the European trade bloc to maintain preferential access for their products.

“The Common External Tariff (CET) of the Economic Community of West African States (ECOWAS), which allows duty-free cross-border movement of goods, has erased whatever benefits Nigeria hoped to derive by rejecting the EPA, Oladunjoye said.

Some companies now manufacture in Ghana and bring in finished products to Nigeria duty-free because of the CET, so the local industry is not protected,” he said.

Outside the cocoa sector, Federal Government has echoed arguments expressed by other African states that their weak manufacturing industries are simply not ready to compete on a more equal basis with imported European goods under an EPA.

This is premised on the prediction that signing an EPA could blunt the growth of Nigeria's non-oil sector, which expanded 45 percent in 2007.

Nigeria has about 35 to 40 percent cost handicap as a result of our poor infrastructure, so if we throw our borders open to all sorts of European goods like the EPA demands, our industry would likely die.

From all indication, the Federal Government's plan to triple cocoa production with the launch of an ambitious development programme to 600,000 tonnes by this year appears to have been defeated.

Three years ago, Government indicated its intension to pump in N154million naira into subsidies for farming chemicals and seedlings.

No doubt, world cocoa production trend is influenced by a number of domestic policies, which in turn impact on permanent production shares of producing countries.

Two years ago, a group of eight African nations agreed to a plan aimed at establishing a better deal for the continent's cocoa producers.

Among the strategies agreed to be put in place are a production management plan that covers issues such as storage and stock control, and a means of ensuring that cocoa farmers are paid competitive prices for their products.

The countries also agreed on strategies for increasing local consumption of cocoa products, and on programmes to meet international quality standards such as those of the EU. Industry analysts say that in order to avoid a glut in the cocoa market as a result of anticipated increased production, there is need for Nigeria, as a major producer to map out strategies on how to maintain the equilibrium”.