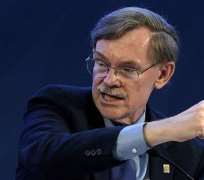 Outgoing World Bank chief Robert Zoellick said on Wednesday he will join think tanks at Harvard University and in Washington when he steps down from the global development institution at the end of this week.

Zoellick said in a statement he will join the Belfer Center for Science and International Affairs at Harvard University and the Peterson Institute for International Economics in Washington when he leaves the bank at the end of his five-year term on June 30.

He will become the first distinguished visiting fellow at Peterson and a senior fellow at the Belfer Center, which is linked to the Kennedy School of Government at Harvard.

"I hope to work on the intersection of economics and security, applying history to policy questions of today," Zoellick said. "Both institutions have been at the cutting edge of research and policy development, and I have benefited greatly from both in the past."

Zoellick, a Republican who has served as U.S. trade representative and deputy secretary of state, has often been cited as a possible U.S. treasury secretary if presumed Republican presidential nominee Mitt Romney is elected in the November 6 election.

The World Bank's new president Jim Yong Kim, former president of Dartmouth University and a physician and anthropologist, takes the reins at the World Bank on July 1.