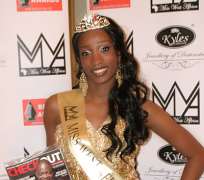 22year old, Shireen Benjamin from Sierra Leone has been crowned Miss West Africa 2009 and after winning her tearful mum run to her. This is the second ever Miss West Africa and also the second from Sierra Leone to carry the title. Shireen, Aminat Salami the 1st runner up, and Yewande Abiodun the 2nd runner up, were all sashed by the current Mr England and crowned by Amina Kamara who won the crowds attention with her elegant presence. Diana Slater, Mr England's chaperone, said she had never seen anything like this after a large number of people in the audience celebrated Shireen's crowning.

The event was filled with amazing highlights and performances from Levi Roots (founder of reggae reggae sauce), Robert Milner (violinist on the night), C'MAD and many of the talented pageants. The judges on the night were Pauline Long founder of the Befftas, Kay B international RnB singer and star, Junior Green British hair award winning stylist, Ian Wedgewood from Mindstudios, Anoosh UK celebrity stylist, Emilio found of West Coast promotions, Sinem popular African media journalist. Yvette Gate who is in need of bone marrow donors, a young Gambian child and charity of which the Miss West Africa event intends to make its audience aware of was also meant to be a judge on the night, unfortunately, she was stuck in the hospital that night. Also the V.I.P. Votes were added to the judges score which was calculated and put together independently by Check Out Magazine.

The Miss West Africa pageant, known for being one of the few ethnic pageants with grand status, high level performances and well organised, is actually only in its 2nd year of running. Organiser Nana Tamakloe stated “This is only our second year, but when things are done in the right manner people would show you respect as if though it had happened for decades, cause those you work with talk and tonight we have seen the results” continued “I am proud of Shireen, I am not going to lie, I was thinking what is the coincidence the second Miss West Africa would be from Sierra Leone again, I had outweighed all the pros and cons of each pageant winning without even analysing the potential of Shireen due to this, and then after she won I was excited like Yes that's my winner! I don't think anyone in that room could honestly say she didn't deserve it, which I'm excited about because it's the same way I felt last year.”

The organisers have already been working on Miss West Africa 2010 which will be taking place in Ghana, Africa, with heats organised in Maimi, New York, London, Europe and of course West African countries. Miss West Africa 2009 was sponsored by the Beffta awards and Kyles Collection jewellery and goes down in history to be the first black beauty pageant to take place in UK with it's own custom made crown and a proud day for West Africans. Shireen Benjamin intends to act as Miss West Africa in it's true sense, she will be available for public interviews and features from Monday the 8th of December 2009. Hopefully we would seal the 2009 reign with a positive outlook on west Africa's new queen. To interview or book Shireen for features, contact the organisers at [email protected] or visit http://www.misswestafrica.com.