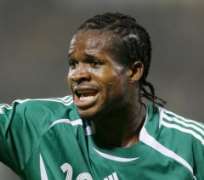 Disturbing reports getting to Nollywoodgists.com confirm that former Super Eagles midfielder, Christian Obodo has been kidnapped by some gunmen in Delta State this morning.

The former Udinese football player was reportedly kidnapped the Zion Faith Ministry Church, Efunrun at the early hours of today.

No contact has been made from the kidnappers to his family as at the time of writing this story.

Obodo played for Plateau United before he became one of the hottest properties in the Italian Serie A where he had a brilliant season at Perugia.

He scored his first ever Serie A goal in a 2–2 draw against Inter at the end of the season 2003.