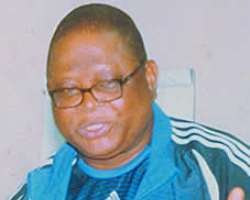 Linus Mba
The name, Linus Mbah, is now synonymous with refereeing. He is in every consideration a father figure in the Nigerian referee family after paying the price and meticulously climbing through the ranks.

Fielding questions from Sunday Sunsports in Abuja recently, the Enugu State-born referee spoke on the challenges facing refereeing in Nigeria and the effect of the wrong impression from Nigerians that Nigerian referees are the most corrupt body in the country.

Admitting that the body is not corrupt free, he disclosed the disciplinary measures the new executive adopted to sanitise the system, just as he went behind the curtain of his experience to recount his closest shave with death in the hands of spectators.

'Actually, my memorable match was in 1987 during the two-legged FA Cup finals between Abiola Babes FC and Ranchers Bees of Kaduna…. Some people were angry with me for disallowing seven goals…. Honestly, if I had stepped into Kaduna after that match, the spectators would have used my flesh for pepper soup. If the fans had reached me after the match, I would not have been a living person by now,' he recalled.

Proud to be member of the referee family
As a consultant to the Nigeria Football Federation (NFF) on Referee, FIFA's Technical Adviser on Referee, long time member of CAF's Referee Committee and elite match commissioner for the FIFA World Cup, I will remain a proud member of the referee family until I die. There is nothing to be ashamed of especially as my membership extends to CAF and FIFA level. I have worked relentlessly for FIFA and CAF, climbing to the position where I am now is an asset to both bodies. They have equally given me the meritorious recognition that is due to me.

Nigerian referees and corruption
Depending on why Nigerians call our referees the most corrupt body in the country, for me, the refereeing circle in Nigeria per se is not corrupt as the media and others portray it. The truth is that we have been going through some phases. During our time at the helm of affairs, and when we were still active, there was discipline in the system. Discipline in the sense that every referee, no matter where he officiated, would have it in mind that he would give account of whatever he does. The spirit of accountability and conscience kept pushing the referees to aim for higher standards.

When I was the president of NRA (Nigerian Referees Association) and chairman of Referees Committee between 1992-1996, there was a fundamental change in the recruitment of referees. In the past, the level of education did not count. But during our time, we recruited referees with sound educational background. It was easier to teach the educated ones to appreciate the rules and regulations guiding refereeing.

Later on, politics crept into the recruitment of refereeing, resulting in having political referees than technical ones. However, I'm happy to say that although the number of registered referees has increased from 300 during our time to more than 3000 now, we don't expect a corrupt-free system in that large family. It would be foolhardy to say that some are not corrupt.

Some referees are corrupt, while some are not properly trained and equipped with the necessary education and experience. Some are too old and cannot cope with the pressures of modern refereeing. But the truth is that we have very young and vibrant ones coming up now.

There has been a lot of transformation in the last three years. Refereeing is gradually improving and we are weeding away those corrupt ones and those that are politically minded. We now have young ones who want to make name in their career. Only recently, we added a new dimension in disciplining the referees. The situation now is that any referee, who messes up a match, would face serious disciplinary measure. Only last month, we sanctioned about six referees. The news of the disciplinary measure went round to give danger signal to others to sit up anytime they officiate matches.

We gradually want to continue the sanitisation process and waging the war against corrupt referees. The only appeal we want to make is for the football family to create good environment for referees to operate.

Unfortunately, the fault is from the media because many of them don't take time to investigate how many Nigerian referees that are involved in continental and international officiating. They don't know when Nigerian referees leave the shores of this country for matches.

In the first week of May for instance, a set of four referees left this country to officiate matches. Another set will participate in the CAF Champions League, but nobody reported it. Many of them have gone out for matches early this year. For example, Peter Edibe was involved in the last edition of the African Nations Cup up to the final match of the tournament, but the media did not inform the public about it. They only celebrate and tell Nigerians the mistakes referees make. Nobody wants to report the good things they have done.

I think it is lack of information that still make Nigerians to have the impression that Nigerian referees are not forces to reckon with on the continent and at the world stage. I want them to know that we are among the best in Africa. They should not also forget that if we don't see Nigerian referees officiating in the finals of tournaments, it is because Nigerian teams usually go beyond the group stage.

•To be concluded next week