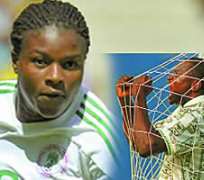 Oparanozie
Desire Oparanozie wears jersey No. 9 in the Falconets, the same jersey number the late Nigeria's all-time goal king, Rashidi Yekini, who passed on penultimate Friday in his hometown, Ira in Kwara State, wore in his playing days in the Super Eagles.

But the Falconets' striker is currently ruing her inability to honour the legendary Yekini, whose recent death threw the entire nation into a rude shock when she had a befitting platform to pay a glorious tribute to the departed hero.

Oparanozie, who is the livewire in Nigeria's Under-20 women forward line, despite several attempts, could not hit the back of the net in a recent FIFA Under-20 Women's World Cup qualifiers against DR Congo in Abeokuta.

Although the encounter ended 4-0 in favour of the Nigerian girls, Oparanozie lamented her inability to be counted among the goal scorers in the match, despite preparing her mind to celebrate in the same manner the late Yekini did when he captivated the world with his excitement by holding the net tightly and screaming after he had scored the Nigeria's first-ever World Cup goal against Bulgaria in 1994, a game that eventually ended 3-0 in favour of Nigeria in the United States of America.

'Rashidi Yekini's death came to me as a shock because I had no prior information that he was sick. I'm particularly disturbed,' Oparanozie said while in a chat with Sunday Sunsports last weekend in Abeokuta. 'It's painful that the legend, who I shared the same national team jersey number is gone.

'When I was preparing for the game against DR Congo, I told myself that if I score in the match, I would celebrate the goal in the same manner Yekini did in 1994, when he scored Nigeria's first-ever goal in a World Cup. That iconic celebration style would have been my appropriate tribute to the departed legend. But unfortunately for me, despite the fact that we beat DR Congo 4-0, none of the goals came from my boots. It was like the more I tried to score, the more I lost the chances that came my way. However, I was pleased when Ebere (Orji's) quick rebound converted one of my misses.

The striker continued: 'I understand that Yekini played in the same field during his career spell with Gateway FC. I have the belief that his spirit inspired us to win DR Congo convincingly in the match. He will ever remain a hero and an icon for we the younger generation of national team players. May his gentle soul rest in peace,' she prayed.

The 19-year old forward, together with her longtime friend, Ebere Orji, who came in as substitute were undoubtedly among the outstanding performers during the match against DR Congo.

She declared that Falconets, already on the brinks of stepping into Japan for the FIFA Women's World Cup, would qualify for the championship in grand style without dropping a point in the qualifiers. 'We heard much about the overwhelming strength of DR Congo before the match and it rattled us a bit. But we realised much earlier that we had to put our acts together to surmount any opposition, and that was what we did to beat the visitors silly.