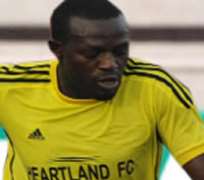 In what looks like a twist of fate, the two Nigerian representatives in the CAF Confederation Cup would be up against two teams from Congo DR and South Africa that go by the name, Leopards. In one of the two matches scheduled for today, Warri Wolves will be hosting Black Leopards of South Africa with the intention of securing an emphatic result in the first leg to make the long trip to the former apartheid enclave a mere formality.

The Warri-based side, under the tutelage of vastly experienced Belgian Coach, Maurice Cooreman, saw to the elimination of Sierra Leonean club side, FC Kallon in the previous round of the competition with a 2-0 aggregate score. Since the Sierra Leonean side, owned by former AC Milan star, Mohammed Kallon, was not an easy nut to crack for Wolves, then, it should expect stiffer opposition from the South African side in today's encounter.

In the other game, also billed for this afternoon, Heartland has a more Herculean task on its hands as it faces the Leopard of Congo DR.

Ordinarily, this fixture shouldn't have generated any serious attention if the Leopard had not upstaged Sfaxien of Tunisia in the previous round by defeating the North African side home and away. With that feat, Heartland has its job cut out and perhaps, the only way to subdue the Congolese side is by beating it convincingly at home and prepare for the worst in Congo in the return leg.

If the quality of players at Heartland's disposal is anything to go by, then getting a good result at the Dan Anyiam Stadium today shouldn't pose a big challenge to the Naze Millionaires. Just few days ago, Heartland got clearance from CAF to field Super Eagles' right back, Chibuzor Okonkwo in this game. Okonkwo's return is expected to strengthen the squad, which already boasts of Super Eagles' stars like Ikechukwu Ibenegbu and a host of other top quality players.

However, if the players continue with the way they squandered the chances they created against their Cameroonian opponents in the previous round, Owerri fans might be in for another potentially hypertensive game. In the mean time, General Manager and CEO of Heartland of Owerri, Chief Fan Ndubuoke, has assured that the team would live up to its expectation when it confronts AC Leopard of Congo at the Dan Anyiam Stadium today in the first leg of the CAF Confederation Cup round of eight game.

Ndubuoke, while reviewing the Naze Millionaires' preparation in Owerri recently, said that Heartland FC has players who are not only of high quality, but also have good experience going into the encounter and, therefore, called on Nigerians to give the team their full support.

'We know that no game is ever easy and we also know that AC Leopard is a good side, but I trust the quality and experience of my players and the technical crew, who I expect to deliver. A good number of our players have tested action at the African level before now and we also have players who are in the national teams, so I don't expect that we should be afraid of any opponent,' he said.

Ndubuoke revealed that a lot of motivation would be given to the players to enable them to give their best in the match, disclosing that Governor Rochas Okorocha, who had been a good motivator to the team, is expected to grace the match. Meanwhile, camp sources revealed that Heartland FC players were in high spirit and had promised that they would not let their supporters down.

Coach Lodwijk de Kruif will select from a pool after most of his key players, including striker Brendan Ogbu, who netted the winning goal against Cameroon's Unisport Haut Nkam, reported fit for action.