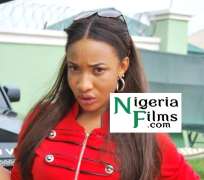 Nollywoodgists.com can exclusively report that Tonto Dikeh has been dumped by her billionaire lover, Osita Promise Offormezie for another Nollywood actress.

According to the gist, Promise allegedly had a hot romance with the controversial actress, Tonto, who has about 58 tattoos on her body.

Things changed between them when Promise met another sexy actress, Onyi Alex, who has been warming the billionaire's bed.

We scooped that Onyi, who featured in the movie, 3Somes, has been living with Promise in his Umuguma, Owerri home for some weeks now.

According to further information gathered by Nollywoodgists.com, Promise planned to take his new bed mate to Dubai for Easter celebration but later change his mind due to some unexplainable reasons.

Nollywoodgistss.com also discovered that Promise has an obsession for Nollywood actresses as his bed companions. He was said to have got pant down with an actress, who has an innocent looking face.

Another actress this billionaire has slept with is this actress, who has love of attending to almost every events in town. This actress is sexy and is now getting controversial.

We were able to get international passports of the two new lovebirds (Promise and Onyi).

We could not confirm if Tonto is already aware of the new actress in Promise's life. Both Tonto and Promise were said to have enjoyed each other while their relationship lasted until Onyi came between them.