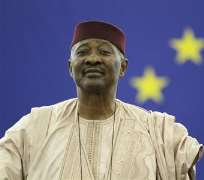 SAN FRANCISCO, April 08, (THEWILL) - Ongoing moves by the power-seizing junta in Mali to hand over the reins of the country to the president of the National Assembly has received a significant boost with Sunday’s official resignation of the dethroned president, Amadou Toumani Toure.

"We have just received the formal letter of resignation from President Amadou Toumani Toure," Djibril Bassole, Burkina Faso's foreign minister who has been a foremost mediator for the Economic Community of West African States (ECOWAS), confirmed. "We will now contact the competent authorities so that the vacancy of the presidency would be established and so that they take the appropriate measures."

Sixty-three-year-old-Toure, who immediately disappeared into hiding after the coup, met mediators in the capital city of Bamako, attired in a flowing white robe and a traditional fedora, and looking calm all through.

“I am doing this without any pressure, in good faith, and it is especially out of love for my country that I have decided to hand in my resignation letter,” he said.

Mali’s junta announced only on Friday its readiness to hand power to a civilian in exchange for amnesty from prosecution. But it did not come until ECOWAS enforced border and trade sanctions, just as global pressure mounted.

On Friday, after three days of negotiations, the junta signed an agreement with mediators, promising to make way for a unity government with speaker of the parliament, Diouncounda Traore as interim president.

But elections originally scheduled for April 29 still remain a huge doubt as the north is now in the grip of rebels comprising Tuareg-led MNLA separatists and Sharia-seeking Islamist fighters.

The separatist National Movement for the Liberation of Azawad (MNLA), emboldened by the influx of arms from Libya’s war last year, since capturing the north have already declared an independent state of "Azawad."

The declaration has attracted widespread international condemnation, with neighbouring countries still unsure whether to launch a crackdown on the northern rebels or dialogue with them.