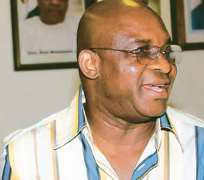 MAKURDI, March 21, (THEWILL) - President of the Senate, David Mark on Wednesday underscored the importance of unity within the rank and file of the north-central zone of the Peoples Democratic Party (PDP), following the conclusion of a zonal congress that produced the shock defeat of Bamanga Tukur, an aspirant for the office of national chairman of the party.

Addressing delegates of the zone in Makurdi, Benue State, preparatory to Saturday’s national convention in Abuja, Senator Mark highlighted the importance of unity to the zone, saying it would “stand” if it remained “united,” or “fall” if it allowed space for divisions.

Recalling that the zone has been crucial to the party’s consistent maintenance of internal democracy, he advised members to continue embracing wide consultations and team work in the pursuit of their aspirations.

He also harped on the importance of maintaining the zone’s track record of peacefully conducting its congresses, and implored the new executives of the zone to justify the confidence and trust reposed in them by the party faithful.

“You now have a bigger responsibility to lead the party in the next four years. You have our trust and confidence. You cannot afford to fail us,” he said. “We have been working together and it has paid off. We can only make progress if we continue to work together.”

Welcoming the delegates, the host governor, Gabriel Suswam thanked party members and urged them to jealously guard their loyalty. “We must continue to work as a team of united force if we must achieve peace and progress,” he said.

The new executive body of the party in the north-central zone is headed by national vice chairman, Alhaji Yusuf Ayitogo.

The well-attended congress had the likes of state governors in the zone, members of the National Assembly, and ministers, Labaran Maku of the Information Ministry, and Abba Morro of Interior. Others in attendance were former national chairmen, Chief Solomon Lar and Ahmadu Ali.