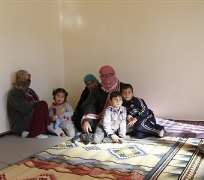 Syria's President Bashar al-Assad faces growing pressure for blocking humanitarian aid and human rights abuses, with the U.N. humanitarian chief set to visit the country this week and the broadcast of harrowing pictures said to show torture victims at a hospital in the embattled city of Homs

Secretly shot video footage aired on Monday by a British television station shows what it said were Syrian patients being tortured by medical staff at a state-run hospital in Homs.

The video, which Channel 4 said it could not independently verify, showed wounded, blindfolded men chained to beds. A rubber whip and electrical cable lay on a table in one of the wards. Some patients showed what looked like signs of having been severely beaten.

"The ultimate goal of air strikes should be to establish and defend safe havens in Syria, especially in the north, in which opposition forces can organize and plan their political and military activities against Assad," McCain, an influential Republican who previously has called for arming the Syrian opposition, said in remarks on the Senate floor.

The United Nations says more than 7,500 civilians have died in Syria's crackdown on protests against Assad's government.

U.N. humanitarian affairs chief Valerie Amos said on Monday that the Syrian government had agreed to allow her to visit the conflict-wracked country later this week, an announcement that followed sharp international criticism of Damascus for not letting her into the country.

"As requested by the Secretary-General (Ban Ki-moon), my aim is to urge all parties to allow unhindered access for humanitarian relief workers so that they can evacuate the wounded and deliver essential supplies," she said in a statement.

Amos said she plans to be in Syria from Wednesday to Friday.

Syria's decision to allow Amos into the country comes after intensifying international criticism, including a rare rebuke of Damascus by the U.N. Security Council last week for failing to grant the U.N. humanitarian chief access to Syrian conflict zones.

It was not immediately clear whether Amos would have the unhindered access she has been demanding. Several Western diplomats told Reuters privately that they were concerned Damascus appeared to have waited until it "finished the job" by decimating Homs before allowing Amos into the country.

Britain's Channel 4 said it had obtained footage of shocking scenes at the military hospital in Homs, filmed covertly by an employee and smuggled out by a French photojournalist identified only as "Mani."

"I have seen detainees being tortured by electrocution, whipping, beating with batons, and by breaking their legs. They twist the feet until the leg breaks," the employee who made the video told Mani.

"They operate without anesthetics ... I saw them slamming detainees' heads against walls. They shackle the patients to beds. They deny them water. Others have their penises tied to stop them from urinating," the employee said.

FLEEING THE COUNTRY
Braving army patrols and winter weather, hundreds of Syrians crossed into Lebanon in the past 24 hours to escape the heaviest shelling of their border towns since the uprising against Assad began last March.

In the hillside town of Arsal in Lebanon's Bekaa Valley, residents said 100 to 150 families arrived from Syria on Sunday -- one of the biggest refugee influxes so far.

Families trekked on foot through snow-capped hills to safety, but many others were caught, one refugee told Reuters.

"My house was bombed and a giant hole was left in one side of the house," said a 21-year-old man in a black leather jacket and black-and-white scarf from the Syrian town of Qusair.

Syria has so far brushed off international pressure to halt its violent response to an uprising that was inspired by revolts that have toppled four Arab autocrats in the past 12 months.

The U.N.-Arab League special envoy to Syria, Kofi Annan, will travel to Damascus on Saturday for what would be his first visit since he was named to the post last month.

Russian Foreign Minister Sergei Lavrov said he hoped a meeting with Arab counterparts in Cairo on Saturday would bring the world closer to agreement on how to end the bloodshed, but gave no sign Moscow would stop protecting its old ally Assad.

Moscow, along with China, has been widely condemned in the West for vetoing a U.N. Security Council resolution that would have backed an Arab League call for Assad to step down as part of a political transition.

Some Western powers expressed hope that Vladimir Putin's election as Russian president on Sunday might provide an opening for a change in policy.

British Prime Minister David Cameron called Putin on Monday to discuss Syria and other matters of international concern, a spokesman for Cameron said.

"The Prime Minister and Mr Putin also discussed Syria and the need for united international action to bring an end to the violence and prevent the situation deteriorating into civil war," the spokesman said.

French Foreign Minister Alain Juppe said Moscow had isolated itself with regard to the Arab world and the international community following its stance on Syria.

"We can understand that during the election period the moment wasn't right to make the Russian position evolve," Juppe said.

"I would like therefore that Russia's position changes and I am ready to discuss it with the Foreign Minister, the same one if he is kept in his post, or his successor if he is changed."

Juppe said he did not think it was impossible to get a U.N. Security Council resolution and that this was something that Paris would be working on in the coming days.

Initial signals from Russia, though, were that diplomacy still has some way to go before a resolution will pass muster.

Russian Deputy Foreign Minister Gennady Gatilov said on Monday that a new U.S.-drafted resolution on Syria is only slightly different from a draft Russia vetoed last month and needs to be more balanced.

Western envoys at the United Nations said last week that the United States had drafted an outline for a new resolution demanding access for humanitarian aid workers in besieged Syrian towns and an end to the violence there.

"The new U.S. draft U.N. Security Council resolution on Syria is a slightly renewed version of the previous vetoed document. It needs to be significantly balanced," Gatilov said on Twitter.