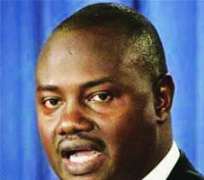 Boko Haram claimed responsibility for the incident, which claimed 45 parishioners.

Mr. Biu had dispatched a team of policemen and Kabiru Umar to Madalla to search the house of the alleged mastermind, who escaped in a controversial manner. Umar was arrested at the Borno State Governor's Lodge in Abuja in January. He was re-arrested in Mutum-Biu Village in Adamawa State on February 13.

Biu was detained and investigated over his role in the escape by the police commission.

His dismissal was one of the highlights pushed out by the commission, which appointed seven new Deputy Inspectors-General of Police (DIGs) and 13 Assistant Inspectors-General (AIGs) even as four Boko Haram men were arrested in Kano yesterday.

Biu's appointment with the police force was terminated by the commission over his alleged role in the escape of Umar.

Biu, who was recalled to the police two years ago after about 10 years exit in controversial circumstances, was promoted to the rank of Commissioner of Police on December 15, last year.

However, a total of 21 senior police officers have been elevated to the ranks of DIGs, AIGs, and Deputy Commissioner of Police [DCP], according to a statement by the spokesman of the PSC, Ferdinand Ekpe, who also announced Biu's dismissal, even as the boss of the Economic and Financial Crimes Commission (EFCC), Ibrahim Lamorde, an Assistant Commissioner of Police, was the only officer promoted to the next rank of DCP.

While commending beneficiaries, PSC Chairman, Parry Osayande, however, warned police officers and men to rise up to the security challenges confronting the nation, saying the commission would not hesitate to wield the big stick on those who do not put in their best in furtherance of ongoing police reforms.

Meanwhile, four members of the Islamist sect were arrested in Kano yesterday after a gun duel with the Joint Task Force (JTF) soldiers and policemen.

The hostility, which recorded multiple blasts and exchange of gunfire, started at about 4.30am following a surprise attack by the sect members on a military/police check-point, located at Kawo Ring Road by Teeshama Area.

The actual figure of causalities could not be ascertained as at Press time, but a policeman was believed to have been shot in the legs.

The explosions following the shoot-out frightened the residents, who were holed up in their houses until about 6.30 am, while several primary schools within the area were shut.

Sources told the Daily Sun that the sect members had thought that the affected check-point was manned by only police officers.

'They were, however, taken aback by the quality of response they received as the soldiers at the check-point immediately returned fire,' said the source, who added that with the subsequent reinforcement by the JTF, the entire vicinity was eventually cordoned off.

The Daily Sun observed that as at dawn, several military equipment, including armoured vehicles, were hurriedly deployed in the troubled spot, while a number of Police Mobile Force in the trucks were equally dispatched to beef up security.

The source told Daily Sun that some of the sect members were chased to an uncompleted building in Larabar Abasawa, where they were arrested in the house of an old man after they had hid themselves in one of his rooms.

In Damaturu, Yobe State yesterday, two residents were shot by gunmen suspected to be Boko Haram. One later died of gunshot wound in the hospital.

The attack came barely five days after the militia men killed a district head at Geidam, east of Yobe. The district head, a former protocol officer, was also shot in front of his house shortly after performing his evening (Magrib) prayers.

In like manner, sources said the gunmen had stormed the residence of their targets in the state capital, Damaturu, and shot them.

'I heard the gunshots, but I was in my house close to the area. I came out few minutes later and saw people running, I also ran back into my house. It was this morning I heard about what happened. Sadly, one of the men who was shot has died in the hospital,' a resident who does not want his name in print disclosed. Confirming the incident, the state Commissioner of Police, Tanko Lawal, said the gunmen came into the house and shot the two people.