CANADA PM IN CHINA TO DISCUSS OIL AND ENERGY ISSUES 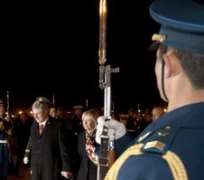 Canadian Prime Minister Stephen Harper is in China for talks that will focus on oil sales and other economic ties.

The four-day visit emphasises efforts by Canada to diversify energy sales as nearly all of its oil exports currently go to the US.

Mr Harper arrived in Beijing on Tuesday night, accompanied by his wife, officials and 40 business leaders.

He will meet President Hu Jintao, Premier Wen Jiabao and other top officials.

Correspondents say Canada will find a willing buyer in China.

The visit comes soon after a US move to block a major oil pipeline project running across the US from Canada.

Speaking before he set off for Beijing, Mr Harper said the US decision highlighted the need for Canada to expand its exports to new markets.

Washington blocked the Keystone XL project – which would have seen a pipeline running from western Canada, down the length of the US to Texas – on environmental grounds.

The Associated Press says Chinese state-owned companies have invested more than $16bn (£10bn) in Canadian energy over the past 10 years and hope to get access to reliable supplies of fuel.

The BBC's Michael Bristow in Beijing says that if negotiations on this issue do get anywhere, it will be in part down to the belief that Canada has softened its attitude on human rights in China since the early days of Mr Harper's premiership.

Mr Harper is also scheduled to visit Guangzhou, the industrial and business hub in the Pearl River Delta, and Chongqing, the southwestern urban centre.

He is also expected to sign several trade agreements and discuss a loan of pandas to Canadian zoos.