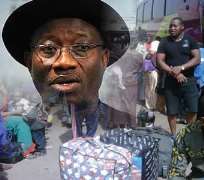 “I am pleased that Ohaneze Ndigbo has urged Igbo to remain where they are and go about their lawful business.” --President Goodluck Ebele Jonathan, February 6 2012

No decent human being should be expressing pleasure in the situation where those in danger and already victimized are being advised, blackmailed and intimidated to remain in the same dangerous environment. Especially when these hapless victims are not allowed to defend themselves or their property with effective weapons. Especially when those urging the victims to stay put and those “pleased” with this wicked urging cannot offer tangible and effective protection for the victims; and they would never exercise the option of trading places literally with the victims to show a good example.

No responsible person can say he is “pleased” that hapless, wounded, trapped, terrorized, terrified and defenseless Igbo have been urged to “remain where they are” in Northern region, especially in Kano—the current bloody hotspot of the day—considering what has been going on there, even as we speak.

No honest human being can be “pleased” to support the urging of wounded, dying, and soon-to-be wounded soon-to be-dying Igbo in Kano and other Northern Nigerian towns to stay put “AND GO ABOUT THEIR LAWFUL BUSINESS”. Just how can one already marked and singled out for death who has witnessed the dispossession, maiming and killing of his own kith and kin, “go about their lawful business”? In a lawless territory controlled and ravaged by relentless and vicious Boko Haram, drawing and exchanging fire from armed roaming Nigerian military and security agents, how does one go about one’s “lawful business”? Oh, such damning insensitivity!

This statement by President Jonathan means that he is willing to ignore the awful one-sided damage and destruction of life and property inflicted on the Igbo residing in the North, now in hiding. It also means that President Jonathan is going to deny that there is an element of pogrom, ethnic cleansing and genocide directed against the Igbo in what Boko Haram has been doing in Northern Nigeria recently. President Jonathan told the peoples earlier that Nigeria cannot defeat Boko Haram, in which case, as has already been proven, his government is unable to or incapable of providing security for those foreigners and infidels as the Igbo living in Northern Nigeria are known—those being “urged” to sit there and go on with their normal business when the President has made it absolutely clear that their security cannot be guaranteed by his government.

It is not going to be enough for the President to say that he was merely agreeing with OHANEZE Ndigbo. The President should know by now that OHANEZE has never spoken for the Igbo, choosing rather to work for the individual power and money interests of its members which can only be fulfilled anytime OHANEZE sells out the Igbo. Who knows what they were promised this time by Nigeria and how much they will get to betray the Igbo? Ralph Uwechue, OHANEZE official, who was reported to have sent an official letter to the President, is in fact a turncoat, a quisling whose shameful history of betraying Biafra / Biafrans in the highest quarters during the Biafra War is there for all to read about. His present-day crocodile tears only prove how cynical he and OHANEZE are in regards to Igbo collective interest and survival. The President knows that the Igbo have no respect and no confidence in OHANEZE and the cliquish socio-political class it serves. Siding with OHANEZE places President Jonathan on the anti-Igbo position: no wonder the unbecoming insensitivity of the President to the real plight of the Igbo living in Hell in today’s Northern Nigeria.

Perhaps, President Jonathan being pleased with the sordid plight of the Igbo in Northern Nigeria will change when the body-count of Igbo dead reaches a certain six-digit number, “n”. And, by then, OHANEZE and Igbo governors will have been amply rewarded by Nigeria for delivering hapless Igbo into the waiting mauling jaws of Nigeria. History will hold both parties to account, one day. For now, here are things that President Jonathan can do to prove that he understands the situation clearly.

1) Provide a security escort and secure convoy service for all Igbo desiring to leave Northern Nigerian to bring them safely back to Igboland; bill the Igbo for this service if necessary..

3) Of course, extend the above to all other persons and groups who are as such aggrieved and as such victimized.

4) Support, plan and execute with expedition a plan calling for the sovereign ethnic nations in the Nigeria geopolitical space to meet to decide on conditions, forms, modes and modalities of inter-national relationships if and where there are mutual interests and consent.

There can be no moral justification for continuing this carnage and mayhem playing with God-given lives and livelihoods of peoples for the sake of maintaining the lie, illusion and delusion that Nigeria is or can be one. Everyone—the entire world—knows that such a lie cannot be propped up any longer. It is a crime against humanity to support directly or indirectly the maintenance of an active killing field in the name and form of, and for the sake of, a non-existent national unity.

A word or two for OHANEZE and Igbo governors and Igbo political class: for your insensitive and deliberate poisonous prescriptions for the Igbo masses at the hands of Nigeria, which are based on the satisfaction of your own personal drive and lusting for power, post and money, we leave you in the hands of our Chi.