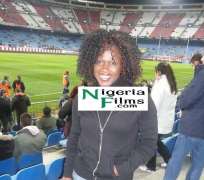 Of course it is no longer news that Star actress Uche Jombo and Ikechukwu Uche have parted ways but what is new is that Miss Jombo is now denying they ever had a relationship.

The talented thespian told a celebrity blog that she and the soccer star had never been officially an item, despite copious photographic evidence.

The sultry actress was asked;What was your relationship with Uche Ikechukwu (Super Eagles Footballer) like? she said Have you seen or heard anywhere that I admitted I was dating him?

Asked; There have been lots of rumors about you dating him and the supposed break up, can you set the record straight? she said I will rather let it remain that way; uncommented.

It is one of those things that I will never comment on. Ever; like never with capital N.E.V.E.R.

The last time I checked, it's still my life, even though I can't stop people from writing stuff about me because if I want to stop that, I will stop being in their faces. I don't begrudge people but I have a right to choose the things to tell and things not to. This is one of the things I don't wish to tell.

Miss Jombo might not be completely lying. Maybe they never were officially in a relationship and were just hanging out and hooking up. I know a lot of babes who try to get away with that. And Ikechukwu Uche seems like the type who'd go for that sort of thing.

THE AFTERMATH OF UCHE JOMBO'S BREAKUP WITH IKECHUKWU;SHE FINALLY SPEAKS ON MARRIAGE PLAN.