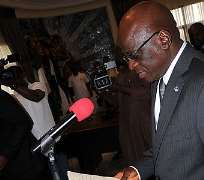 CALABAR, January 27, (THEWILL) - The Speaker of the Cross River State House of Assembly, Hon. Larry Odey has been sworn in as the Acting Governor of the State by the State Chief Judge, Hon Justice Dorothy Eyamba-Idem following the ruling of the Supreme Court which terminated the tenure of Senator Liyel Imoke as the Governor of the State.

Speaking after taking the oath of office, Odey described the occasion as a sober moment for the State but expressed confidence that within a very short time the Independent National Electoral Commission (INEC) will come out with a timetable to enable Cross Riverians re-elect Senator Liyel Imoke as the Governor of the State.

Odey emphasized that such a situation had been experienced in the State before and the people will do it again thereby coming out stronger, saying that there is no doubt a strong synergy that exists among the three arms of government in the State which has culminated in the path of progress and growth while urging all to put in maximum effort for the State to maintain its pride of place.

The Acting Governor enjoined all political appointees and public officers to remain faithful as well as continue to make the sacrifice expected of them to move the State forward, advising that Cross Riverians should be law abiding and mindful of the activities of miscreants who might take advantage of the situation on grounds to create confusion.

He urged them to be prayerful for the State to forge ahead while soliciting for cooperation and understanding from everyone to enable put the machinery of government on course.

Earlier, the Secretary to the State Government, Mr. Mike Aniah in an introductory remarks, disclosed that the office of the State Governor became vacant following the judgement of the Supreme Court earlier in the day had terminated the tenure of Senator Liyel Imoke as the Governor of the State which meant that statutorily, somebody has to fill the vacuum.

According to Aniah, the person whom the Constitution finds suitable to take over the mantle is the Speaker of the State House of Assembly, Hon. Larry Odey.