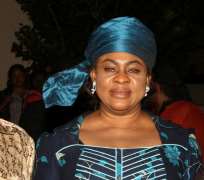 ABUJA, January 26, (THEWILL) - Minister of Aviation, Ms Stella Oduah was yesterday grilled by Senators over a seeming duplication of the sum of N8 billion in the 2012 budget of the Ministry.

The matter became an issue when she appeared before the Senate Committee on Aviation to defend the N49 billion allocated to her Ministry in the budget.

A member of the Senate Aviation Committee, Senator Babayo Garba Gamawa spotted the duplication of the amount.

The lawmaker wondered why the amount was listed in the breakdown of allocation to FAAN when the total capital vote for FAAN was just a little above N4 billion.

He described the amount as “curious” and demanded an explanation from the Minister.

He said, “The figure of N8 billion was reflected in the allocation for the main Ministry. The same amount is also duplicated in allocation for FAAN with the same words. May we know what accounted for this?”

The Minister simply described the reflection of the amount in two places as a “copy and paste error.”

The committee asked her whether the amount should be deleted, and the Minister answered in the affirmative.

There was also confusion as to the amount earmarked for “remodeling,” “renovation” and “modernization” projects in 11 airports as the Minister struggled hard to convince the committee that the three words are not the same.

The senators wanted to know why all the projects were warehoused in the Ministry leaving out agencies like FAAN.

The Minister explained that agencies under her Ministry would come in where necessary.

Oduah was also asked why she wanted to spend so much money remodeling and renovating when what is in vogue is the Build, Operate and Transfer (BOT) concession deals.

The Minister noted that “BOT is not doable in aviation” saying concessioning takes a longer process.

She said that 125 concessions have been made on many projects without a single one working.

According to her, what is needed in the aviation industry is a joint venture arrangement as BOT would not be favourable to government. She added that joint venture is only required at the management level and not at the terminals.

Oduah christened the 2012 budget of her Ministry as “Renaissance Budget” explaining that the budget is a renaissance because “it marks the true rebirth of the aviation industry in Nigeria.

She noted that the state of facilities and infrastructure at the nation’s airports are quite appalling.

The Minister said since assumption of office last year, one of her major concerns has been to give the airports a facelift saying, the focus gave rise to the remodeling projects being under taken in 11 airports across the country.

Her focus, she said, is the completion, rehabilitation and renovation of the airports, including Hajj and Pilgrims terminals.

Chairman of the Senate Committee, Senator Hope Uzodinma warned that the 2012 budget must be totally implemented.

Uzodinma noted that full implementation of the capital budget is the only way for economic development of the country.

He noted that the aviation industry must grow from its present status to what is obtainable all over the world.