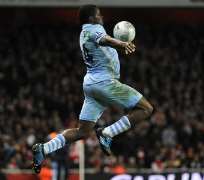 Onuoha has agreed a four-and-half year deal and joins for an undisclosed fee, Rangers said on their website (www.qpr.co.uk).

The 25-year-old played for Hughes when he was City manager and the Welshman said: "He is very versatile. He can play centre back or right back, and has good pace. He is a very good addition to the squad.

"Nedum had other options but his experience with myself and the other guys here was a big factor in why he has come to us. I am pleased about that."

Onuoha made his City debut as a 17-year-old in 2004 but has found his playing time with the club increasingly limited in recent seasons. He spent last season on loan at Sunderland and had featured just three times for the Premier League leaders in the current campaign.

QPR, who returned to the top flight this season after a 15-year absence, are 16th in the 20-team Premier League and two points clear of the relegation zone.

Former Wales boss Hughes was appointed manager this month after Neil Warnock was sacked following a run of poor performances.