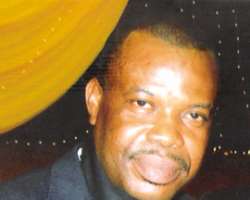 Many of his colleagues probably don't know his given name -- Steve Eboh. Many people are used to calling him Ajebo — the popular tag for spoilt brats. Indeed, that is the name the Enugu State-born screen personality has been known with since he joined the industry close to two decades ago. A native of Oji River, Eboh is a gifted and self-motivated practitioner. Moviedom caught up with the gangling actor of vast credit and a one-time member of the Ministerial Committee on the review of the nation's film policy.

Why they call me Ajebo
It was actually in 1994 that they started calling me by that name Ajebo. And it was on the set of an Igbo movie, Frame Up, which we shot in Imo State. I recall that it was the first time that such a large crowd of artistes would be travelling out for a movie shoot anywhere in the East. I think it started with Ngozi Ezeonu and Bob Manuel. They walked into my room on location and discovered that I had everything that would make my stay on location comfortable. My fridge was well stocked with assorted beverages. That was how they named me the original Ajebo — what they called kids who are pampered; and that was because I had everything I wanted to eat in my room. Since then, the name has stuck.

Before Nollywood
Before 1992, I was working on television — NTA like occasional appearance in the popular Tales by Moonlight and then Telemovies. I was working in a private firm and so I would always return to my job after shoot. I was also involved in some politics. I was part of the group that was campaigning for Bashir Tofa to be president. But along the line, I went into movies and dumped politics. That was when I took part in Dirty Deal by NEK Video Links. After that, I stayed on and even gave up acting on television since home video was the in-thing then.

Growing up
I am from Oji River Local Council of Enugu State. I was born down there but I was brought up in the North, Zaria, to be precise. I had my early school in the north, in Funtua and back to Zaria. My brother, who was based in Zaria then, nurtured me. They never wanted me to stay with my mum. They felt she was going to spoil me. So, I grew up with a brother who taught me how to be self-confident and how to think through a decision. That is why I don't regret any of my actions and I don't blame people for my fault. But it was from my brother that I took the lead, I mean as an entertainer. He was involved in a lot of extra curricula activities such as serving as master of ceremonies in events and all that. So, I took a lead from him. I came to Lagos, moved to NTA and then the movie industry.

Parental objection
No. I come from a very humble family and a family that would not interfere in whatever you are doing. All they demand is that you must ensure that you don't tarnish the image of the family. But some people frown at my involvement. I recall that one of my intimate friends asked me to name anyone that has made it as an actor. I am sure that they would not ask me that question now because I would count myself as those that have benefitted from acting. Today they are all happy for me and want to see me in every movie.

Movie credits
I would have done between 60 and 80 films. The first one was Dirty Deal, and then Taboo another Igbo movie followed and then Evil Passion. I was also a major part of Frame Up, August Meeting, Last Burial and a whole lot of other titles.

Regrets
I have never regretted being in this industry. It has given me so much. I am comfortable by the special grace of God. At least, I am not begging. The fact that I can take myself from point A to point B without asking for a loan gives me joy. The other thing I like is the fact that I have peace of mind. The only pain is the impression people have about you. You see, people think that you are the same character you play on television in real life. They see you and what you hear is 'chief bring the money for us to share' as if you own the film. If you go to the village and they have to task everybody, yours will be higher because for some of them a millionaire in a movie is a millionaire outside the movie. You can't walk the street freely.

Happiest moment
My happiest moment was when I stayed in the same hotel with Nigerian international Kanu Nwankwo aka Papilo. He is one person I admire a lot. But on sighting me at the reception area, he asked someone to stop me so that he could have the privilege of shaking hands with me. So in my mind I was saying, I thought I should be the one running after Papilo. I was too happy to see him and he was also happy to see me too.
If I were not an actor
I would have been a journalist. My brother was a freelance journalist back then. I admired the way he wrote. I would have also loved to drive. I admired drivers particularly those that drive big lorries and buses. I am sure I would have made a good transporter if I had gone into that profession.

Challenging work
My most challenging work will be Narrow Escape. Because that was the first time I came face to face with anything that had to do with cultism. I have never been so scared in my life like when we started shoot for the movie. It was a set we created but I tell you that we had to pray so that we don't get attacked. We almost didn't enter the hall because everything appeared scary. We had to pray and bind whatever that was putting fear into us. But the movie came out well and was considered very successful.

Hobbies
I love football a lot. I love to play table tennis to. I like hanging out with friends. And I can stay on a football match for a whole day. I also love discussing politics. I am not married yet even though I have completed all the rites. My wife should be joining me soon. She is not an actress. And you see I don't rush things in life. I take my time. I have always prayed to God to give me my wife and at the right time too. I have been under tremendous pressure from my family, age grade and even the press but it can only happen at God's time and I have been assured that the time is not too far from now. I have found the person and to God be the Glory. No regret. Acting is life. It has given me so much joy and peace of mind. For food, I like yam and maize. I am on the quiet side, so I don't like noisy music. But I am impressed with what our boys are doing with hip-hop.