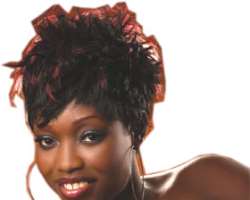 Kokoroko which was directed by talented cinematographer, Wudi Awa notched two awards namely Best Gospel Video and Best Director at the recently held Nigerian Music Video Awards. The VCD features six videos including songs such as Do, Thank You, Kokoroko, Karoviovwe, Body Guard and Thank You My People .

Shot in different locations in UK, Lagos, Sapele, & Shagamu , the videos were directed by talented cinematographers including award_winning, Wudi Awa, Simple Sheddy,& Dan Hart of Light Engine Films,(UK). While unveiling the new work recently to the press, the musician stated that she decided to embark on the project due to popular demand from her teeming fans.

The artiste who recently concluded a successful tour of Europe said, “Expectations is high now and I am working with professionals who know this job well. I want my fans to watch out for these videos.” Kefee's outfit, Branama Afrique is expected to market the product while it will be distributed by Joemicky Int,l Ltd.

As a way of giving back to her fans, the artiste revealed that CD's will come with a scratch and win portion where fans will stand the chance of winning a grand prize of a South African trip. She added that there are other consolation prizes such as branded items like Wrist watches and T-Shirts.

In 2010; She'll be embarking on tours around African countries like Uganda, South- Africa, Ghana and Nigeria, during which full-blown concerts will be organised. On her return, she'll also embark on another tour, this time on the European circuit.

According to Kefee her follow up album titled 'Confession' will be ready mid-next year, while the first singles from the album will be released in March 2010.