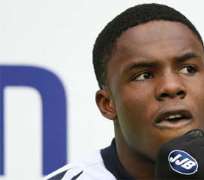 On Sunday, big forward Anichebe staged a sensational comeback after he was sidelined by a groin injury for the past four months.

'I dream of getting back to Eagles. But for the injury I was in the team already, so I am looking forward to be back with the team as I wait for coach Stephen Keshi to extend an invitation to me,' he told Sky Sports TV. He said he hopes it is the beginning of better tidings for him in the New Year.

Victor Anichebe
'I am very happy that I am back and playing again. It was great way to start year 2012, it is a sign of good things to come my way this year. I believe the goal will spur me and the team to greatness,' he disclosed.

'It was very hard for me to be out of action for that long because I always want to play. I had few setbacks to my career due to injury and I hope that is over now.

'I want to keep improving. I couldn't have asked for a better way to return, giving my team an away win was marvellous.

'I was not surprise that I played because I was to play against Sunderland during the week, but I was asked to just rest, so I was sure I would be in action against West Brom.' Anichebe dedicated his stunning strike against West Brom to his father, who is ill and in hospital.

'I hope the goal will aid my dad's recovery, my mum is there with him in the hospital, I hope they return home soon,' said the Everton striker, who came off the bench Sunday to make a telling difference.