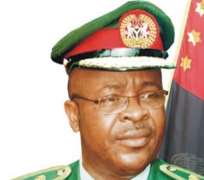 The COAS said the military “ran over their stronghold and their ammunition site” during the successful raid where the military also suffered casualties with 3 deaths and 7 soldiers sustaining wounds. He added that the terrorists confronted soldiers with sophisticated and heavy artillery – bombs, General Purpose Machine Guns and Sub Machine Guns, but were crushed by state forces.

The head of the army made the announcement during an official visit to the Guards Brigade headquarters in Abuja today.

The Boko Haram has killed more than 400 civilians this year in northern Nigeria.