UNDERSTNDING SENATOR MOHAMMED ABBA AJI IN THE LIGHT OF THE QUEST FOR THE CHAIRMANSHIP OF THE PDP. 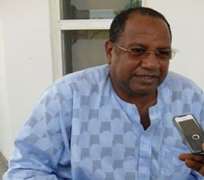 I first came in contact with this fine gentleman when he was a member of the 5th Senate and took a vested interest in his person when he was elected the Minority Whip of the Upper House. He was always vocal in not only securing the support of ANPP and PDP senators for his Bills and Motions, but he also collaborated with his colleagues in co-sponsoring Bills and Motions together with ANPP and PDP Senators. He therefore, served as a valuable bridge between the senators of the majority and minority parties. It was these attributes that made his colleagues elect him as the Minority Whip of the Senate. Indeed, he still enjoys a lot of respect and friendship in both Chambers of the National assembly.

When he declined to contest election in 2007, Sen. Abba Aji went on to serve as Adviser on National Assembly Matters to late President Musa Yar’Adua and to President Goodluck Jonathan until last June. I had another chance to watch the antecedents of this gentle man when I joined the Friends of Democracy for Goodluck Jonathan and became a member of the media committee. As the Chairman of Friends of Democracy, I found Sen. Abba Aji to be a resolute and strong believer in the unity of our great country despite his being from the Northern part of the country and a devote Muslim. He conducted the meeting with great skills and spoke eloquently and inspiringly - despite the who-is-who that often assembled .Through Friends of Democracy, he helped in building a lot of support across the country for the candidature of President Jonathan and his eventual election. He inspired most of us that are members of Friends of Democracy for Goodluck Jonathan to work relentlessly. I also had another opportunity to observe him closely during our Presidential Campaign Council meetings where his contributions proved to be valuable. His personal achievements are also legendary. He obtained Bachelors and Masters Degrees in Administration from Florida International University in Miami (USA) in 1979 and 1982 respectively, and a PhD from the Department of Government of the University of Manchester (UK) in 1990.

When you also see the senior administrative positions that he has held in the last three decades, you will see why he is in a class of his own. They range from being the Executive Secretary of Borno State Health Management in the 1980s, to Permanent Secretary in the Borno State Civil Service and Managing Director of NSITF at the federal level in the 1990s. In the political realm, he was elected to the Senate from 2003 to 2007 where he also served among other things, as the Minority Whip of the Senate. And until June 2011, he was the Special Adviser to the President on National Assembly Matters. It is also noteworthy that he was the Chairman of the 2008 North Central PDP Zonal Congress, and a Member of the PDP National Caucus, this Congress produced the National Secretary Baraje who incidentally today is the Acting National Chairman.

When we talk of a bridge builder we are talking about one who can build across both the political and ethnic divides of our Great Country. The PDP today is in search of an arbitrator, and of an interface that can pull the party together and reconcile its members. One who will not only make PDP win elections, but also win the hearts of the Nigerians. In my humble opinion which is based on personal observation, that person is certainly Sen. Abba Aji.

PDP is viewed with utmost suspicion in every move we make even when we are right we are thoroughly scrutinized that our right would sometimes seem wrong in the court of public opinion. We cannot deny the fact that our party the PDP is the greatest party in Africa, but can we in all honesty compare ourselves with the ANC in South Africa? We should as the political party controlling most of the political offices in the country, act as a pace setter in all ramifications. Taking a look at the fact that when he was the Managing Director of NSITF he was appointed for two tenures and served it out, also as the Special Adviser on National Assembly matters and as a serving Senator he also served out his tenure of Office he certainly has an advantage, especially when we take into consideration the instability we have found in the Leadership of our Party the PDP since inception, we certainly need a Chairman who has shown stability in any sphere of service and in character.

The Chairman we need today is a Transformational Chairman one who is acceptable to the six geo political zones of our country, a firm and decisive person, a person with strong character, a goal getter, a reformer, one that abhors corruption and one who believes in the Transformation program of our President. Again, without sounding immodest, the cap fits Sen. Abba Aji.