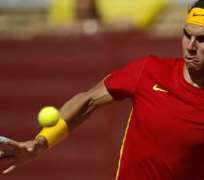 Rafael Nadal will play Argentina's Juan Monaco in Friday's opening singles rubber as the world number two returns to the scene of his first professional triumph to begin Spain's bid for a third Davis Cup title in four years.

Nadal was just 18 and had yet to win any of his 10 grand slam titles when he defeated American number one Andy Roddick on the same indoor clay court at Seville's Olympic Stadium to help the Spanish claim the Cup in 2004.

Thursday's draw for the final of the 99th edition of the competition pitted Nadal, now 25, against world number 26 Monaco, while Spanish number two David Ferrer will take on 11th-ranked Juan Martin Del Potro in Friday's second singles in the best-of-five tie.

"The court is practically the same and it was the first great emotion I experienced as a professional," Nadal was quoted as saying in an interview published in Thursday's edition of sports daily Marca.

"Beating Roddick was special not only because of the victory but for everything that match meant," the Mallorcan added.

"After all that has happened since it's nice to return to the place where everything began and I hope the result of the final is the same."

Argentina, who lost at home to Spain in the 2008 final when their bid for a first title was wrecked by infighting, face a stiff task to upset the favourites, who are playing at home and on their favoured surface.

Neither Nadal or Ferrer have ever lost a Davis Cup singles rubber on clay, Nadal boasting a 14-0 record on the red dust and 18-1 overall, while Ferrer, the world number five, is 11-0 on clay and 16-4 on all surfaces. Spain have won their last 20 home Davis Cup ties and their last 22 on clay.