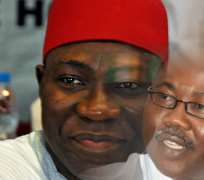 The Deputy Senate President of Nigeria Senator Ike Ekweremadu was recently elected the speaker of the Economic Community of West African States’ parliament. This landmark achievement of the nation’s Deputy Senate President elicited a powerful letter to him from the Human Rights Writers’ Association of Nigeria in which the group in the letter endorsed by yours faithfully urged him to use his position to promulgate sub-regional legislations on the fight against trans-national crimes of terrorism, drug and human trafficking which have constituted some of the greatest obstacles to the advancement of the promotion of human rights and regional peace on the West African Sub-continent.

In a reply dated October 24th 2011, endorsed by the speaker of the Parliament of the Economic Community of West African States Senator Ike Ekweremadu, he commended the rights group and promised to use the template presented to him by the organization as the road map for the Third legislature of the ECOWAS Parliament.

His words; “…I consider my election as a clarion call to service and a challenge to further contribute to deepening the roots of democracy, fostering good governance, regional integration, peace, stability, and development in the sub-region”.

Senator Ekweremadu further told HURIWA thus; “…I have diligently noted the various issues raised in your letter for which I am grateful. I can also assure you that they will serve as a roadmap both for me and the Third Legislature of the ECOWAS Parliament even as your views on this and other matters are always welcome”.

Adoke was re-elected into the 34-member commission at the plenary meeting of the UN General Assembly in New York. The new tenure, which begins in January 2012, will end at the end of 2016.

Media report stated that members of the ILC are nominated by member states and elected through the General Assembly, and they must be persons who possess recognized competence and qualifications in both doctrinal and practical aspects of international law.

They are drawn from the various segments of the international legal community, such as academia, the diplomatic corps, government ministries and international organizations.

Adoke, 48, is a Senior Advocate of Nigeria (SAN), and was first elected into the commission in 2011 to fill the casual vacancy arising from the resignation of Mr. Bayo Ojo, who was elected in 2006.

ILC, which holds its yearly session in Geneva, Switzerland, is responsible for the preparation of draft conventions on subjects which have not yet been regulated by international law or in regard to which the law has not yet been sufficiently developed in the practice of states.

The commission is also responsible for the precise formulation and systematization of rules of international law in fields where there already has been extensive state practice, precedent and doctrine.

The commission held its first elections on November 3, 1948, and opened the first of its annual sessions on April 12, 1949.

The election of these Nigerians into important international and regional positions especially that of the Federal Attorney General is an opportunity to remind the Federal government of Nigeria that as a member of the global community, all good international laws that are yet to be localized and domesticated by the National Assembly are immediately domesticated.

One good piece of international legislation that is yet to be clearly domesticated and localized in Nigeria is the convention on the elimination of all forms of Discrimination against women.

Nigerian women have suffered series of discriminatory practices and spousal abuses and the law enforcement mechanism is either so weak or heavily compromised that the abusers/offenders are not punished.

Adoke should use his presence in the International Law Commission to campaign vigorously for the international law against terrorism to be clearly established to check the rise in terror-related attacks in Nigeria because for anti-terrorism campaign to be effective, terrorism ought to be fought as a grave transnational crime.

But, Mr. Adoke should know that ‘charity begins at home’ and must lobby the Nigerian national legislature to domesticate the convention on the elimination of all forms of discrimination against women. Women rights are integral aspects of human rights.