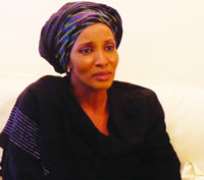 • Bianca
Ikemba Nnewi, Dim Chukwuemeka Odumegwu-Ojukwu's widow, Bianca, yesterday told a delegation of the Nigerian High Commission in Britain, led by the High Commissioner, Dr. Dalhatu Tafida, that her husband's death came as a surprise especially after he had been discharged.

A downcast Bianca, who was receiving visitors at her sister's residence in central London, revealed that her late husband, who had been in a London hospital since December last year, was already very aware and alert and was planning to return to Nigeria for full recovery.

Bianca, who singled out President Goodluck Jonathan, his wife, Patience, Governor Peter Obi of Anambra State, Dr. Tafida, embassy staff and Nigerians home and abroad for standing by the family in their hour of travail, said Ojukwu had surprised doctors and the family severally even when he was given up for death and recovered.

'I will like to begin by thanking His Excellency, Alhaji Dalhatu Tafida, for leading such a strong delegation to commiserate with me today, so short notice because I am sure some of you had other engagements today, I'm sure many of you had to cancel your enagements to come and console me today. Alhaji Tafida called as soon as he heard of his demise, I'm sure he was probably woken up, my husband was still lying on the bed and offered words of support and encouragement and I am very grateful. At times like that, when all hope seems lost, it is amazing how few words are able to achieve.

'My husband as you all know, came here to the UK on the 23rd of December 2010 after suffering a very serious stroke and I will also like to use this opportunity to thank not just Alhaji Tafida who came to the hospital to visit him, to pray for him, also others who prayed for him also. 'We all must die, but I must say his demise at this time came as a surprise, because he had just been discharged from the hospital, he was doing so well and I have never seen him look so well, he was interractive, he was very alert, very aware and we will sing him songs, cracked jokes.

And I remember I was saying to him, it is getting very cold in this country and we must go home, are we going to go home and he would nod very emphatically, but he never did make it home. Very surprisingly, his situation which we thought had improved remarkably, suddenly took a turn for the worse. Like other times, I always say I have seen him through very bad times when the doctors will tell us he wouldn't make it to morning, but he would always struggle and in the morning he would still be there. But this time, he didn't struggle he went peacefully.

'Nobody asked God what his intentions are, but we would have preferred he stayed on, I cannot ask God why at this time. But to God be the glory, He is the giver of life and he decides when to take it. I always say there is nothing more heartwarming in a situation like this when you have all taken out time to come here and share this difficult period with me. I thank you all for taking out this time to come and commiserate with me. I will also like to use this opportunity to thank our President, Dr. Goodluck Jonathan and his wife, Dame Patience Jonathan, who have been very supportive through all this, the Governor of Anambra State who arrived Nigeria yesterday (Saturday) from France, where they had gone on a trade summit with Mr. President and had to get on the next plane coming back to the UK. His wife who was with me throughout this ordeal in the hospital. And so many Nigerians for their prayers.

'You can have the best doctors in the world but I think it is prayers that have kept him this long and I continue to thank you all for your support, Nigerians in the UK and others. And I asked that if you are ever faced with a situation like this that God sent you consolers as you have come to console me today. Thank you'. Earlier, Dr. Tafida said his loss was a great one, not only to the Igbos, but to Nigerians as a whole. 'When I heard the news, the terrible news through a telephone call, it was a great loss not only to you or even to the Igbo race, but also to the whole of Nigeria.

'Chief Ojukwu has helped to shape modern Nigeria because it was through him that we were able to have state that we now call states that are cells of development in Nigeria. His loss therefore, should not be considered as a loss to just one section of the country, it is a loss to the whole country. This is why when we learnt about it, it was unanimously decided that we should be here today to commiserate with you. Our intention will be to send a formal letter to the funeral event, we will also send a letter to the Governor of Anambra State and also to the President.

'We do not want to bother you because we know it is a period of grief, your husband has passed through a long period of agony so to say. We do hope and pray that the call he has answered will be to internal glory', he said.