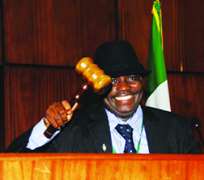 •Tambuwal
No annual budget has ever been as controversial as the 2012 Appropriation Bill, which is due for presentation to the National Assembly anytime from now.

The controversy emanated in September when President Goodluck Jonathan forwarded the 2012-2015 Medium Term Fiscal Framework (MTFF) and Fiscal Strategy Paper (FSP) to the National Assembly for consideration, ahead of the 2012 budget.

The four-year fiscal projection presentation was in fulfillment of the Fiscal Responsibility Act, 2007.

The MTFF and FSP are statutory documents which articulate government's revenue and spending plan as well as its fiscal policy objectives over the period.

The two documents are composed of the macroeconomic framework which gives an analysis of key macroeconomic trends of recent years and provides insight on future policy direction.

The FSP outlines fiscal strategy, analyses expenditure and revenue figures for the years under review, details the assumptions underlying these projections, reviews the previous budget and gives an overview of consolidated debt and possible fiscal risks.

In a September 22 covering letter to Senate President David Mark, President Jonathan noted that the MTFF was prepared against the backdrop of global economic uncertainty.

The MTFF was prepared by the Budget Office in the Federal Ministry of Finance.

In the document submitted to the National Assembly, government said over the 2012-2015 period, it would target a large portion of its spending on key sectors, which include security, infrastructure (including power), agriculture, manufacturing, housing and construction, entertainment, education, health and ICT.

Justifying oil subsidy removal, government projected total savings of N1.2 trillion, part of which would be deployed to providing 'safety nets for the poor' in the society as well as provision of infrastructure through the Sovereign Wealth Fund (SWF) .

Oil subsidy removal or not, there are still salient issues that dog the 2012 budget. They remain largely unresolved for now.

For one, the goal post of the oil benchmark has been shifted, even before a formal presentation of the budget. In the MTFF presented to the National Assembly, the Presidency mulled a $75 benchmark for the budget but had to settle for a lower projection of $70, citing present economic uncertainties.

Another factor that would determine the 2012 budget is the average exchange rate, which was pegged at N153 to $1 but has now been officially pegged at N155 to $1.

The MTFF reads further: 'Government will continue its strategy of fiscal consolidation by which expenditure, particularly on recurrent spending will be reined in and directed to its most productive and growth-enhancing use while efforts will be intensified to increase revenue.'

'Although aggregate expenditure is expected to increase from N4.8 trillion in 2012 to N5.18 trillion in 2015, concerted efforts are being made to make savings from overheads as allocations will be frozen in 2015.

'Capital spending will increase marginally from N1.3 trillion in 2012 to N1.6 trillion in 2015 as government intends to leverage on PPP-type arrangements to supplement capital allocations from the budget.

'A major component of the policy of fiscal consolidation is government's intent to phase out the fuel subsidy beginning from the 2012 fiscal year. This will free up about N1.2 trillion in savings, part of which can be deployed into providing safety nets for poor segments of the society to ameliorate the effects of the subsidy removal.

'The accrual to the SWF as a result of the withdrawal of the fuel subsidy will also augment funds for critical infrastructure through the infrastructure window of the SWF.'

In all these, the National Assembly has yet to sit down at a roundtable with the Presidency and the Budget Office to determine the actual direction, theme and priority areas the 2012 budget would focus on.

Another area of likely discord between the legislature and the Presidency is constituency projects and cutting of overheads expenditure.

Some Senators have expressed disappointment with the slow pace of work on their constituency projects, which have been on since the last session.

Chairman of the Appropriation Committee, Senator Ahmed Maccido, is disappointed with the snail pace of work in his Senatorial district.

Speaking in an interview with Daily Sun in Abuja on the projects, Maccido, who is serving his second term as Senator from Sokoto State, noted that he had, had to complain severally about abandonment of projects in his Senatorial district.

'I'm one of the complainants, if you must know. My complaint is that they started projects in my constituency and abandoned them. I had to write that the six boreholes they started have not been completed.

'They were abandoned in 2010. I don't know the contractor and neither was I consulted. I just saw people working,' he said.

Asked if there was no synergy between lawmakers and the MDGs handling the projects, Maccido replied: 'There ought to be. In fact, we ought to supply the contractors but it's not so. We are supposed to know those who would work for us but we forsook that.

'We agreed that they should supply the contractors. For them to even introduce the contractor to me was not done. I just saw him on site. All they needed from me was an officer who would take charge as my representative and report progress back to me.

'I gave them the location to site the boreholes but was not informed when work commenced. They started the borehole, water started gushing and they stopped at that level. I got papers from the MDGs Office telling me that they have completed 70 percent of work on site. With my own funds, I had to block the borehole and when I had enough time, I did the repairs myself and completed the work. Agreed that it is 70 per cent but it is not completed and that has been the state since 2010.'

Maccido's case is not an isolated one in the National Assembly.

Last year, Senate President David Mark, in response to calls for reduction in the cost of governance, announced that the National Assembly would cut its overheads significantly. Sources in the National Assembly told Daily Sun that although some members are in support of the cuts, they were unprepared for the 50 per cent reduction, which followed thereafter.

Some new members complained bitterly about the cuts while some lawmakers have had to reduce staff in both their offices in Abuja and constituencies. The situation is no better in the House of Representatives where members have had to resort to loans to augment some expenses.

While some Senators are complaining bitterly against the 50 per cent overhead cut, the Presidency is even demanding more cuts. This may likely put the lawmakers on a collision course with the Presidency as it is highly unlikely that they would agree to any further cuts, moreso when the overheads cut of Presidency remains shrouded in mystery.

Attempts by some lawmakers to get the information from the Finance Minister, Mrs Ngozi Okonjo-Iweala, at an interactive parley with all National Assembly committee chairmen last October yielded no result. Rather than give the details as demanded, the Finance Minister reportedly said she could volunteer information about the overheads expenditure of the State House.

Lawmakers rejected the offer. At another meeting, the Finance Minister told the Senate President that there should still be further cuts in the overheads costs of the National Assembly if the new budget would be implemented.

The Senate President was said to have told the minister to put the proposal in the 2012 budget that would be considered by the National Assembly.

Importantly, the Presidency has impressed it on the National Assembly that removal of oil subsidy is crucial to the presentation of the 2012 budget. Removal of oil subsidy, it was learnt, would free up more money for the Executive to implement the new budget.

It was gathered that tempers ran high at the Wednesday parley when it became known that the funding of the new budget is predicated on withdrawal of the oil subsidy.

Besides, it was also revealed that government has no funds at all to execute some crucial projects listed in the 2011 budget while some MDAs which have no capacity at all to execute the projects approved for them have been appropriated funds in the budget.

This time around, the National Assembly is insisting that it must have input into the new budget failing which any budget submitted to it would just remain what it is: A document on the table.