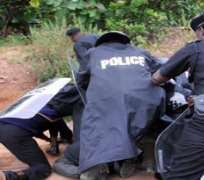 Already the trigger happy policeman is said to have been summarily dismissed from the force while awaiting prosecution.

The tragic incident, Vanguard learnt took place at about 8.35pm on Sunday leaving many people in the area dumbfounded.

An eyewitness claimed that the Corporal had earlier threatened the superior officer and later carried out the threat, hitting Agole in his lower abdominal region causing his instant death.

A police source confirmed the incident and said the Corporal was dismissed immediately after.

The corpse of the Inspector, a Delta indigine has since been deposited at the General Hospital, Ijebu Ode's morgue.

The state Police Public Relations Officer, PPRO, Muyiwa Adejobi, confirmed the incident, saying the Commissioner of Police, Mr. Nicholas Nkemderen had directed that the matter be taken to court.

Adejobi said “The matter is true. The incident occurred and the culprit has been arrested and given orderly room trial. He has been detained and the Police Commissioner, CP Nicholas Nkemderen has directed that he be charged to court.”