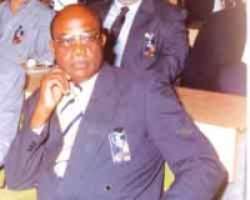 In his primary school days, Godwin Kanu, now 76, never hid his passion for sports as he took part in football, athletics and swimming. His friendship with European with whom he worked ignited his love for swimming to the extent that in the 1950s at the annual J. K Randle Swimming Competition; Kanu was champion in the 100-yard breaststroke, which was his popular event.

In football, he was a member of the school team while also featuring for a local clubside in Lagos Island. During his secondary education at Baptist Academy, Kanu was a delight to watch as a member of the school team, just as his skill in the game also earned him the captain armband at Ijebu-Ode Grammar School, Ogun State. At Ijebu Ode Grammar School, Kanu also held the school records in triple jump and javelin. A knee injury during a match for his club, PWD against Railway in 1957 halted his progress in the game. But while on his sick bed, Kanu developed interest in medicine. He eventually went abroad to study medicine and qualified as an orthopedic surgeon, worked for a long time until he retired from the Lagos State University Teaching Hospital (LUTH) in the 1980s.

Looking back on his life, the president of the Nigeria Boxing Board of Control (NBB of C) told OLALEKAN OKUSAN recently that sports had a positive impact on his in life.

GODWIN Kanu had a passion for sports early in life, was good in them and therefore popular among his peers.

He was so good that, in school, his presence in football matches inspired his team to victory.

For the young Kanu, living in Lagos Island played a huge part in nurturing and sustaining his love for the beautiful game of football.

In those early years, Kanu was good enough to be drafted into a local side that most dominated the game of football in the area.

Recalling how his involvement in sports began, Kanu said: 'I got into sports while in the elementary school in the 1940s because it was part of the curriculum in my school. School sports then was very interesting because it was compulsory in all schools that students must take part actively. And of course, most of us were willing to take part because it was interesting.

'In the elementary school, I participated in football and we used to play inter-class competitions, which were part of the curriculum. I also took part in swimming because my master, a European, whom my father was working for, always took us to the swimming pool, and to the Bar Beach as we lived near Onikan. That was how I developed interest in swimming.

'I participated in most of the competitions like the yearly J. K. Randle Competition in the 1940s and early 1950s. I was champion in the 100-yard breaststroke, which was my favourite event,' he said.

According to Kanu, 'Right from my elementary school, I was so popular in football that apart from playing for the school team, I was also playing for a club in Lagos Island because there were various teams then. I was playing for Lafiaji and we were able to beat most of the Olowogbowo and Ita Faaji Clubs.'

After his primary education at Government School, Sandgrouse Lagos Island, Kanu began his secondary education at Baptist Academy, where he also had an eventful sports life.

'I made the school football team at Baptist Academy soon after joining the school and one of the most memorable matches we played was against St Gregory's College, Obalende, which was very difficult for my team. Whenever we played against St. Gregory's College, it was tension-soaked. In that very match at the St. Gregory's home ground, the atmosphere was charged and we knew we would beat them because nothing could have stopped us, as we were a very strong team then. I was playing outside left and our captain then was Shittu Akinbiyi.

'The match was a preliminary of the annual Principal's Cup and they were afraid of our team because there was no team that wanted to meet us when it came to football. Luckily for us, we were able to win the match by a lone goal.

Kanu's involvement in sports did not go down well with his father, who felt his son was being distracted by an unserious venture. This prompted the senior Kanu to transfer his son to Ijebu Ode Grammar School in Ogun State.

'Sports was a part of me and because I was really getting famous even at Baptist Academy, where I also started playing for the school team, my dad was a bit worried for my educational career as he felt I was getting too popular in Lagos', Kanu told The Guardian.

He continued: 'He decided to transfer me to Ijebu-Ode Grammar to continue my education. The principal at Ijebu Ode Grammar then was Reverend Nicholas, who was a close friend of my dad's. Unfortunately for my dad's plans, the school was also popular in football and athletics and I had to take part in athletics with interest in javelin. I held the school record in javelin and it was not broken before I left the school. I also held the record in the triple jump having participated in the IONIA Games, where I represented my college. In football, I was the captain of the school team.

'Immediately I got to Ijebu-Ode Grammar School, the sports master, Mr. Aderounmu took very keen interest in me and I went to live with him. He liked me so much and I don't think I received any punishment because I was playing football for the college. In any case, I was very obedient and not the type that was rascally as some of my teammates were. In fact because of my involvement in sports, I will say I enjoyed some privileges in those days. Among the privileges was that I was exempted from most of the punishment meted out to the other students in school.

'As captain we won the IONIA Games several times. We used to play against each other in school and we used to travel to other schools to play. This helped us to make friends with other students. My best friend in the team then was J. K. Braimoh who was our best midfielder and because of his built physically, most of our opponents used to be scared of him. Apart from that we were very close because we used to travel together from Lagos to Ijebu-Ode during the beginning of the school and at the end of the term. So we were always seen together on many occasions apart from our sporting activities.'

Despite being actively engaged in sports, Kanu never allowed his academics to suffer and this indeed inspired his father to allow him pursue his passion for sports.

'Sports was part of our curriculum and we thanked God that many of us that were popular, were able to excel academically too because with the way we were trained, we did not neglect any part of our education. If you were involved too much in sports, the tendency could have been to neglect academics. But I thank God that with the encouragement of my parents in those days and in company of good friends, we were able to complete our education. Though my father had changed my school from Lagos, he could not stop me from taking part in sports at Ijebu-Ode Grammar School because my general report in the school was okay. It was not that my parents were against sports but they wanted me to concentrate on my academics.'

Right from school, Kanu had also developed interest in medicine such that whenever any of his colleagues got injured, he was always on hand to assist in treating such athlete.

'My career as a doctor started right from my college days as I showed interest in medicine because most times I used to help our European master who used to take care of us when we were sick especially in passing round the medicines he used as well as the dressing tray. I decided to pursue a career in Medicine when, towards the end of year, I sustained a knee injury during my last match for Public Works Department (PWD), in a first division encounter against Railway in 1957.My dad, who was the manager cum proprietor of Empire Hotel and in charge of the Nigeria Airport catering department had the opportunity for me to be flown to London for treatment. It was not usual to fly abroad then for treatment, but that was what happened.

'While in hospital in London, my interest in Medicine intensified and I decided on Orthopedic Surgery, which I did in the long run. After the injury I stopped participating in sports though I could have resumed because I recovered fully. But in the long run, my studies did not permit me anymore,' he explained.

For Kanu, playing for his school was indeed an honour.

'In those days, playing in the school team gave a fantastic feeling because you felt honoured. Because of the popularity you enjoyed among your contemporaries, you were gratified to be putting on the school colours.'

For budding athletes, Kanu advised: 'For athletes to be successful in life, they have to be dedicated in whatever they are doing and work hard. Luckily today, sports is big business and for you take to it, then you must keep to it because the activities must be continuous. You don't relax if you want to excel to excel and I will always advise that in any sporting activity you decide to partake, concentrate, be dedicated and work hard toward success. It is not just sporting activities, as you must also take your studies very serious because they go hand-in-hand. The two must be balanced because to excel in any, you must work hard.'

The former medical head of the national boxing team is now helping the sport grow as the president of the Nigeria Boxing Board of Control (NBB of C).

His words: 'I came to boxing to contribute by quota to its growth because of my interest in the sport. Before rising to the post of the president, I was invited to assist the boxers as a doctor, deputizing Doctor Olabode, who was then the Chief Doctor.

I rose to become the Vice President to the late president of the body and it was two years ago that I was named the president. Apart from this, I have been nominated as Vice President of the Africa Boxing Union (ABU) in May in Zambia and in the last 15 years, I have been attending the World Boxing Council Convention. My main aim is to improve the lot of boxing in Nigeria.'