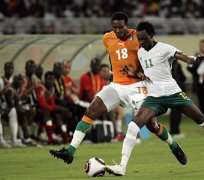 FIFA said on Tuesday it would not get involved in a row involving Burkina Faso who have been accused of flouting rules on the naturalisation of players on their way to qualifying for the African Nations Cup.

FIFA said it was up to national associations to police themselves when fielding foreign-born players to make sure that they complied with regulations.

Namibia protested against Burkina Faso's use of Cameroon-born defender Herve Zengue in two Nations Cup qualifiers against them, saying he was not born there, had no blood ties with the country and had never lived there.

The Confederation of African Football (CAF) threw out the Namibian protest on a technicality at the weekend, saying, among other things, that it was not written on the correct form.

"It is the responsibility of the association intending to summon and field a player for one of its representative teams to examine if the player is eligible to play for them or not," FIFA told Reuters in a statement.

"This means that they have to verify if all the rules are followed.

"We cannot comment on that (CAF) decision," added FIFA.

"Neither are we in a position to establish whether the player is or is not eligible to play for the representative teams of Burkina Faso, since, as already mentioned previously, this is the responsibility of the association.

Burkina Faso had at one point approached FIFA over the player's eligibility but soccer's governing body said it "did not receive any follow-up from the association concerned".

Burkina Faso, who have qualified for next year's Nations Cup, said Zengue, who plays for Russian Premier League side Terek Grozny, had been given a passport because he was married to a Burkinabe women.

However, FIFA statutes say that, in addition to being granted nationality, a naturalised player must have lived in his adopted country for at least five years.

FIFA altered the regulations in 2004 to avoid situations where players simply needed to obtain a passport to play for their adopted nation.