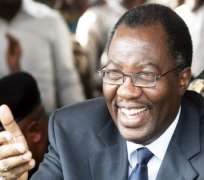 Justice Paul Onamade of the Ogun State High Court sitting at Isabo, in Abeokuta granted the former governor leave to commence a judicial review on the power of Amosun to set up the commission; technically suspending activities of the Truth and Reconciliation Commission until it rules otherwise.

Amosun had on September 14, 2011, set up the Truth and Reconciliation Commission to determine the extent of damages and alleged shoddy dealings of the Daniel led administration.

But Daniel had through his counsel, Professor Taiwo Osipitan sued Amosun over the constitution of the commission, where he urged the court to declare the process of setting up the commission illegal and unconstitutional.

“His (Governor Amosun) power does not include the power to conduct an inquiry on whether the past governor, his aides, persons who served with him committed any crime between January 2003 and May 2009.

“His is not competent by the law to set up a commission of inquiry into any alleged criminal,” Daniel had stated through Osipitan.