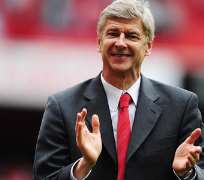 Manager Arsene Wenger urged Arsenal fans on Thursday to keep the faith after the club's poor start to the season.

"I can see fear and discontent among you and I understand it," Wenger told Arsenal's annual general meeting. "I can understand that because we fight against clubs with high resources. To stay at the top we have to stay united.

"Last season was my most difficult to accept the end result. Sometimes I think it was my fault.

"We want to do things with class and be brave. These players are ready to fight. Trust us," said the Frenchman, who was given a standing ovation.

Arsenal's title threat faded badly last season after they lost the League Cup final to Birmingham City. They suffered this season after selling captain Cesc Fabregas and Samir Nasri, before recovering some form in recent games.

The London club are seventh in the Premier League, 12 points behind unbeaten leaders Manchester City who added Nasri to their expensively constructed squad over the summer.

In his first public statement since a 730 million pound takeover in April, American owner Stan Kroenke told the meeting he was at the club for the long term.

Kroenke, nicknamed Silent Stan because of his low profile, also owns teams in the NBA, NHL, NFL and Major League Soccer in the United States.