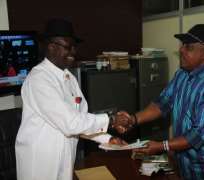 Alaibe and Bruce were at the National Headquarters of the Peoples Democratic Party (PDP) Tuesday, where they both submitted their expression of interest forms to PDP National Organizing Secretary, Prince Uche Sekondus.

Alaibe, Bruce and Honourable Henry Seriake will slug it out with incumbent Governor Timipre Sylva, who may have lost the support of President Goodluck Ebele Jonathan to return as Governor of the oil-rich Ijaw state.

The PDP primary has been scheduled for November 19, 2011, while the governorship election is scheduled to hold on February 11, 2012.