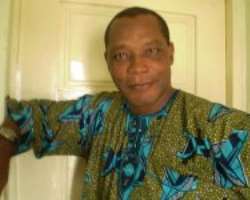 Funny, though, it's real. Norbet Young, the new father whose wife, Gloria Anozie-Young has just put to bed recently got more than what he bargained for on his 50th birthday shindig in Lagos as a female fan presented him via DHL a packet of Condoms.

He wasn't just embarrassed on discovering the content of the package but was shocked because his wife was right in his presence during the box opening. We shall give you more details of the birthday party soon

By Alonge Michael for http://www.nollywoodgists.com