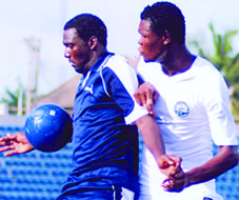 Nigeria premier league defending champion, Enyimba International of Aba, confirmed its desire to win a season double with a victory over Ocean Boys of Brass at the Samuel Ogbemudia Stadium in Benin yesterday to set up a final clash with arch rival, Heartland Football Club of Owerri, scheduled for Teslim Balogun Stadium in Lagos.

Enyimba opened scoring through Rasheed Olabiyi in the 8th minute and held on to the slim lead until the first minute of the added time when Ocean Boys equalised to literallyset the stadium on fire as fans roared with excitement.

It stayed that way till the end of the 30 minutes of extra time when the centre referee ordered both teams to play penalties to decide the winner.

Enyimba, scored four out of its five penalties, while Ocean Boys scored three.

Enyimba who is billed to face Al Hilal of Sudan this weekend is now going into the match with confidence according to the technical adviser of the team, Okey Emordi.

He said his players were determined as ever to make it a double after crossing the Ocean Boys hurdle.

He, however, praised the fighting spirit of the Brass boys whom he said had rich history of the FA Cup. He said the final match against Heartland would be explosive as he predicted victory for his team that is hungry for a double this season.