Peter of P-Square gets controversial tattoo 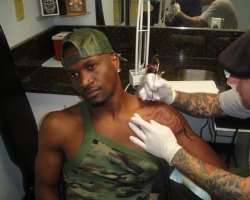 WITH money in the bank, tours scheduled around the world and at the moment savouring the freshness of God's own country, the Hip Hop group, P-Square is really having a ball. Since the duo finished their sold out tour of Gambia, they have since moved to Atlanta in the U.S.A where they chilling for the time being and planning towards their tour in the States of U.S and Canada.

But it seems Peter and Paul Okoye are doing extra curricula activities that have caused a stir within their huge fan base. Peter it was went to get a new tattoo which he posted on his face book and which caused a stir among his fans. One of the fans Arinola Morenike Oguntuga asked painfully, “Why though? I hate tattoo and don't respect any Christian who has it. Sooner or later you will tattoo your whole body including your cute little face...na u sabi sha.” Regina Umutoni was more comical when he commented on the painful wink On Peter's face.

when she commented thus “I thought u wanted the tattoo... Why the Sad look. The things we do to ourselves... heh. Look on the bright side, it will soon heal and u will look tight!” But Queeneth C. Ngonadi-Nwosu was obviously a tattoo lover as she advised the Do Me star not to mind the many comments.;“pet don't mind them, live your life just the way u want it...life is too short...I got mine in three different places yet I am married with kids and a good Christian...holier than those pretenders. Dania J. U. Hassan praised the painful initiative by saying, “You are the man, get which ever tattoo you wish to get, but stay close so that you don't get mislead by ego, owo, kudi,.”