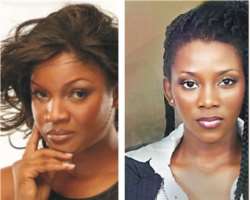 I recently have been interested alot in bringing Hollywood to Nollywood and i was introduced to this Lady by name CHINEZE a young Nigerian lady whom i think has started.I met her brother recently in Abuja and we spoke about her upcoming $600.0000 movie she recently shot in Los angelos where all hollywood happens.

I call her arrogant because she knows and thinks she has made it,she knows she has beaten Nollywood,the arrogance as i call her even goes to the extend of her responding to people who ask about her movie being regular nollywood in quotes she says "don't you dare compare my originality and proffesionalism to those Nollywood "faux pas",well props to her she goes to the extend of calling this movie Africa's Warner bros.I tried booking and appointment for an interview with her as an actress but her response was "i am not ready for press",seriously who does she think she is?Rumour has that just the shoooting of the movie is $600.0000 and rising as she is still in post production OMG who even does that in Nollywood.

Why in the world will a movie shot 7 months ago not be ready for press seriously its more arrogant than i thought.

Genevieve who got a big shot of $60.000 and Omotola got $43.000 which you will rarely see co star are her NOLLYWOOD actresses and gossip says she has Hollywood stars and A list latino actresses hhmmm BIG things poping.

I will congratulate her on that well done sister but then where in the world did a Regular Nigerian girl get $600.0000 to waste on a movie meanwhile she can use that in Nigeria to shoot more than 50movies with a lamborghini and a house seriously who does that?

Gossip says she studied at the NEW YORK FILM ACADEMY in los angelos right in universal studios where she is currently in her last year and will be graduating with a masters in film making and the movie "IJE" AS THESIS project wow ...600grand on a student film seriously i'll settle with that as in couple of years and use to make more money than wasting on a movie.
Hopefully the movie is worth it.Come back to my blog as i will blog on this movie and put pictures often untill movie is out..

Lets all patiently wait for "IJE" SHE SAYS