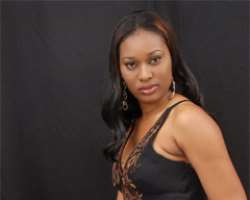 Reigning Miss Delta Soap, Rita Amaka Echendu was Showtime Celebrity guest during the week and in this interview with Bridget Amaraegbu, she opened up on the challenges she faces daily as Queen. She also spoke about her relationship with men and how being tall has affected her personality.
Enjoy;

How does it feel to be a queen?

I still feel like my normal self. But being a queen comes with different responsibilities because a lot of people are looking up to you. All the same, it feels good to be a queen.

Amaka is so tall. Is it all it takes to be a queen?

(Laughing) Not necessarily the height. It takes a lot of courage, intelligence, wisdom, physical beauty and height too. Definitely, I'll not rule out the height aspect of it because it also counts. You can agree with me that most international models are about 5.11 ft tall. So, height is part of the criteria.

How tall are you?

My height is 6.4ft. Many people have said I should be a basketball player instead of this modeling thing. But you see, female sports is not well projected here in Nigeria, especially basketball. Unless you want me to become a footballer and begin to play like the Okochas and Kanu Nwankwos.

With your height, as a child, how did your school mates treat you?

It was difficult for me to manage my height as a growing child because most of my mates didn't feel comfortable with it.

At a point, I became angry with myself because I was always spotted out everywhere I went. It was difficult for me to do certain things that my mates would do and get away with, and I wasn't happy about it. I didn't appreciate this height until I became an adult. I thank God that today he has granted me favour with this height.

And men! Have you been lucky to have men as tall as yourself?

May be, I should say it's natural for short people to like the opposite sex tall. So, short men were always approaching me. I've never been lucky enough to have a guy as tall as myself. Most of the men that approach me are short and sometimes, I feel they want to take advantage of my height.

Were there any sacrifices you made to wear this crown?

Well, anything could be a sacrifice. The only sacrifice I can remember making is suspending my studies. Before becoming the Delta Soap Queen, I'd thought I'll further my studies immediately I finished the National Youth Service Programme (NYSC).

But I discovered that modeling itself is a career, which I must live up to. It's only in Nigeria that the people take modeling as a part time job. Most successful international models are fully into it. Some of them do not even study another thing apart from modeling.

They eat and dine it. In fact, they build all their lives into it. But here in Nigeria, modeling is not well appreciated. So, one cannot rely solely on it because you'll beg for food if you did. So, a lot of models in Nigeria try to do something else to supplement their earnings. Right now, I still model and do my official job as a Delta Soap Queen.

It seems you're putting on extra weight...?

Yes, but forgive me. I'm really working on my weight to make sure it comes down. I was bigger than this some few months ago. But I'll go back to my usual and normal size.

As a queen, are there things you can no longer do?

Public figures are not allowed to do certain things, especially those things that can bring you scandals. In fact, you wouldn't need anybody to tell you not do to this or not to go to a particular place before you can avoid them.

There are other beautiful girls out there who can go to certain places and they're not noticed. But as a queen or celebrity, if you just walk past those places, people will not only say that you were there, they'll also add that you did one thing or the other. These things affect our social life mostly because we are just restricted to a particular style of living.

We can't attend all parties that we would have loved to attend, and so on. If we must attend, then dressing becomes the next wahala because if you don't dress very well, people will read a lot of meaning into it.

How did you enter into this contest?

A friend of mine talked me into it and I felt I should give it a shot since I have the natural endowment. At least, it was an opportunity to showcase what God has given me.

What was the criterion for selection?

The first one was good skin, then complexion and height. Height was a major criterion because I remember all those who were just 5ft and a little above that were turned down. The required height then was at least 5.7ft.

Did you ever think you'd win when you were entering for the competition?

Honestly, I didn't. I wasn't even thinking about winning. I wasn't expecting it because I was not really into the business. So, I was still doubting if I was on the right track. I wasn't really sure if I could compete with all the pretty girls I met then because with all I heard about winning, I thought there was more to it. Suddenly, I was pronounced the winner and I was really very happy.

What are challenges associated with being a queen?

Yes, one of them is people having different impressions about you. They keep assuming that you are what you're not. For example, I received a call from somebody I've never met and he was telling me that he is having an argument with his friends.

“That his friends say I can't make a good wife as a public figure but he's trying to convince his friends that I can make a good wife.” My dear I couldn't say a word to him because I didn't know what to tell him. You find out that people just sit down and discuss you from their own viewpoint.

I didn't know whether that guy was proposing marriage to me or he was trying to get me a husband. The bad thing is that as they discuss me and pass it across, some people may be tempted to believe I have a relationship with them, which is wrong. Others will even go as far as thinking that you have been married and divorced.

Another challenge is losing your privacy. If you're spotted with a guy for any reason, everybody assumes both of you are in a relationship. But so far, I'm not complaining because without all these stories, my reign will not be complete.

When will your reign expire?

It was supposed to expire in February because that was exactly one year I was crowned. We had to postpone it because of certain new things we introduced into the pageant. But another queen will be crowned this year by God's grace.

How was your growing up?

Growing up was wonderful. Just the way God designed it. For everyone, there's always the tough and good times. My father used to do buying and selling. But right now, he has a production company and dad never believed in house-help or nanny.

I was born and brought up in Calabar. Apart from my secondary school days when I stayed as a boarding student, I had to go to University of Calabar from my home. You can call me Calabar girl if you like, in fact I'm a half cast.

So can you prepare all those Calabar foods?

Yes, Edi kaikon, Ikpan Kwokwo, Atama Soup and I'm happy about that. My parents and I are from Anambra State but it was good to have stayed in Calabar.

Were your parents supportive when you went into this contest?

My mum knew everything from the beginning but I didn't tell my father. I didn't tell him because I did not want him to discourage me. I just made sure I knew myself and my family all through. I tried my best not to do anything that would tarnish the image of my family.

My father was kept in the dark until he was invited for the D-Day and since I became the winner, he's been flaunting me all over. The only thing he never stops singing to my ears is “does this modeling thing stop you from getting married.”

Who did you take your height and beauty from?

I'm a combination of my both parents. My dad is very tall-above 6ft. But my mum is still very pretty, even at her age. My mum is not short too. She's has an average height and my dad is not ugly also.

How do your friends see you now as a queen?

A lot of them are proud of me because they know I'm a very shy person. So, most of them didn't believe I could do this. I've always been on the reserve side too.

How about your boyfriend?

Before I started modeling, I had one but we broke up later.

Why? Was he not comfortable with modeling?

No, it didn't have anything to do with my modelling career. It just didn't work out and we parted ways happily.

I have a boyfriend now.

So, let me sing like your father. Amaka when are you getting married?

(Laughing) I've told him to take it easy. It's not something I want to rush into because I dread the word 'Divorce'. I really have to be sure of the man who wants me as his better half and not the fling kind of marriage. Some men come around me just for what I am, not who I am, and I know it. What if I'm no longer a model. They might run away. I'm taking it easy. So, everybody should be patient with me. There are many men out there but husbands are very few. So, I really have to be careful.

What are your plans after your reign?

I intend to start my masters programme immediately after my reign, at the UNILAG. I want to do it here in Nigeria because I still have to pick up some other modeling jobs, locally and internationally.