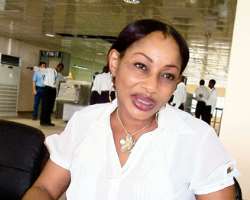 For saying the Director-General of National Film and Video Censors' Board (NFVCB) was not qualified to lead the highest regulatory body in Nollywood, star actress, Clarion Chukwurah has earned the ire of stakeholders in the industry.

Fidelis Duker, the man who has produced various award winning films, called the star actress ignorant saying the fact that the actress is approaching the twilight of her career might be responsible for such an unguarded statement.

In his word “Clarion got it wrong. Some people just talked from point of view of ignorance. She got the fact that Emeka Mba is not qualified to lead NFVCB. Apart from the fact that Emeka Mba has worked in the television industry for years, he was a content provider for Multichoice and later, DSTV before he became the DG. You don't have to be a filmmaker to run the censor's board. All you need to be is an administrator because you are managing people.”

On her allegation that Africa Magic has ruined Nollywood market and that stakeholders who attended the fifth anniversary of Africa Magic are a disgrace, Fidelis said the veteran actress went off mark. “If we look at it very well Africa Magic remains the only platform that has paid the highest amount to Nigeria producers so far. Africa Magic has paid as much as $5000 dollars for a film. I think it will be unfair to criticize them. Apart from the payment, Africa Magic has given our actors and actresses a pride of place in Africa.

It was as a result of Africa Magic that our actors became popular. Africa Magic is a medium where if you cannot afford to buy movies you can watch them, and let me tell you the homes that watch Africa Magic are more than video or NTA. What we should be saying is how we can sit and negotiate with them to get better mileage, and how they can invest in capacity building. I think she is speaking from point of ignorant. She is just ignorant. In as much as I respect her, I expect her to be careful with her utterance.

She was too hard on Emeka Mba. She also said those that attended the fifth anniversary ceremony of Africa Magic are disgrace. That was rather unfortunate, I think she is just ignorant. I think she has gotten to the peak of her career and when you get to that stage you become confused. I think it is wrong for her to say that. One of the problem in Nollywood is that some of us don't know that when you get to some certain stage you watch what you say ”

Another point critics of Africa Magic have used in argument is the fact that it is only producers that get paid while nothing is given to the actors and actresses. Fidelis Duker said actors are to be blamed for that. “How many of them sign standard contract with the producers? Some of them have gotten money from Glo, how many of us (producers) are asking them for money? If we did not make the films, will Glo endorse them? It is a two-way thing. We are both in business. There was a film Bruce Willy act on Nigeria what he demanded for was 15 per cent of the revenue, not artistes fee. We can both start sharing the risk.”

Ope Banwo, the former CEO of Dove Media in a reaction to the interview, says Clarion owes Mba an apology for her vituperation on him. “I read with extreme chagrin as one of my favorite actresses, Clarion Chukwura vilified Emeka Mbah in one of her interviews. She basically accused Emeka Mbah of selling out Nollywood to African Magic. In her interview she blamed both Africa Magic and Emeka Mbah for the declining fortunes of this struggling industry. Though I consider Clarion Chukwura as one of the smartest and gifted artistes in Nollywood, I was stunned that she could get it so wrong. After all she has lived abroad for years and is exposed to the realities of the marketplace.

“Truth is, regardless of our emotional reactions to the declining income of the actors and actresses in Nollywood as well as those of producers and marketers, the bottom line is that the fortune of the industry has nowhere to go but down when the supply of movies far outstrips demand for them. You cannot keep making 100 movies a week that is being marketed mostly to the same small market, controlled by a few people in Idumota and three other small markets in the country, and still expect the income to continue increasing or even remain at the level it was.

“Sometimes I just want to weep when I go to facebook and see that actors like Omotola, Fred Amata, and Genevieve, etc, have maxed out the 5,000 members allowed by Facebook and yet they have no professional image monetizers who can help them monetize their star status and adoration from their fans. Very few have personal marketers and image protectors. Yet, we want to blame Africa Magic? Pleeeeeease!”

“I am a big fan of Emeka Mbah and I think he should be given a national merit award. He came into an industry that is totally clueless about how to join the 21st century paradigm of movie distribution and marketing. He came into an industry where anybody with a cheap camera can lay claim to being a producer and where anybody with a little space in front of his store can call himself a marketer. IT WAS A DISGRACE! He was simply trying to put order where there was chaos and trying to lay a foundation for the future of the industry. Yet, because we have not seen immediate benefits, we want to crucify him.

“Rather than looking at Africa Magic and Emeka Mbah as the culprits, the whole industry needs to focus on its own mess.