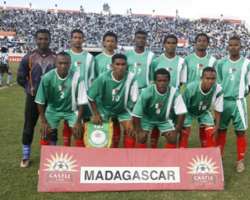 The island country will now play Sunday’s all-important match against the Super Eagles with its U-23 team — a side that fell short at the very first hurdle in the qualification race for both London 2012 Olympics and the All African Games.â€¨â€¨Confirming the sack to local media, Vice President of the Malagasy Football Federation, Doda Andriamisasoa, said: “We already felt the atmosphere in the team was not serene before leaving for the games. The players had demanded more money and boycotted training. Such behaviour is unworthy of players called to defend the honour of theirâ€¨country.”

Coach Frank Rajaonarisamba was also a victim of the capitulation, and has been replaced by Maurice Mosa.â€¨â€¨News of the sack will be hailed in the camp of the Super Eagles, which has had little to cheer about in the lead-up to Sunday’s tie.â€¨

Defensive Stalwart, Taiye Taiwo and forgiven prodigal but prodigiously talented attacker, Osaze Odemwingie lead the pack of injured high-profile players who would miss the cracker. Danny Shittu and Yusuf Ayila, who both arrived camp hale, are also out after sustaining injuries in training.â€¨â€¨Nigeria — with a notoriously abysmal away record — trails group leaders, the Syli Nationale of Guinea, by two points, and is consequently condemned to defeat Madagascar in Antananarivo on Sunday to stand a chance of securing the sole automatic qualification slot in the group.