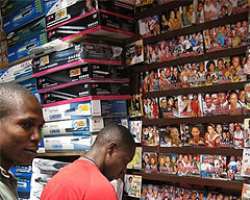 Films that parade adverts of other titles, as is recurrent in the sector in Nigeria, have no place in the hearts of the screening college of the African Movie Academy Awards as far as its 2009 edition is concerned.

In a bid to sanitise the movie sector and improve on technical qualities, the panel tightened the criteria it used to screen entries, as revealed by the team leader, Mr. Shuaib Hussein, in Lagos on Wednesday.

The avalanche of screaming adverts that many film makers start their works with has been a major concern for viewers who had complained that it is not only time-wasting, but also distractive.

Speaking at a media briefing where a Zimbabwean filmmaker, Rumbi Katedza and an entertainment journalist from Cameroun, Armstrong Fombi, were present, Hussein said that the 13-member panel insisted on global standards in line with AMAA's status and vision.

“Any movie that runs more than 120 minutes is not acceptable,” he said. “Since the movie considered by AMAA has to go beyond the Nigerian border, we expect any local language medium you employ to be translated in the form of subtitling.”

Also, the screeners tightened the noose on works that tend to bore the viewers with photographs of actors at the beginning of the movie where the opening credits list is being rolled out.

Beyond the tall orders, however, Hussein reported that a total of 428 films were received from across Africa. Of these, 220 came from Nigeria. From the entire package, however, only some 20 that survived the screening rites were forwarded to the jury that will eventually decide the winners.

Noting that South Africa and Egypt had representation in films in contention, Hussein said Nigeria had 10 of the 20 finalists.