AT HOME IN OYASAF'S HAVEN OF ARTS 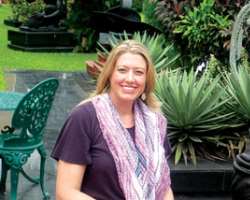 They all came to Nigeria to behold African art works. But by the time they were leaving, they had almost become art works themselves. A proof of this lies in a collection of their photographs variously taken when they were in the vineyard of their art-rich hosts: the Omoba Yemisi Adedoyin Shyllon Art Foundation in Lagos.

These are the eight scholars that have, in the past 14 months, benefitted from the OYASAF Fellowship that exposes foreign scholars to Nigerian arts and artists. The first beneficiary, Rachael Engmann, a PhD student at Stanford University's Department of Anthropology, resumed at the foundation on June 10, 2020. She took a comprehensive documentation of artworks in the OYASAF collection, while also examining the role of museums in Africa's development. Engmann's practical experience with OYASAF was also expected to help her grasp the dynamics of museum exhibition processes in Nigeria.

Since then, Nomusa Makhubu of Rhodes University, South Africa; Kathleen Coates of Iziko Museum of Cape Town, also in SA and Erica Agyeman (Columbia University, New york) have followed suit. Others include Jennie Systma and and Andrea Bauer, University of Vienna, Austria.

Based on the depth of art works they saw in the home of the renowned collector, Prince Yemisi Adedoyin, founder of OYASAF, the story of the fellows, who also seized the opportunity of the 25-day fellowship to visit other art institutions and practitioners, has been that of ' they heard, they came and saw'.

Like many people, who have been to the OYASAF Garden, they expressed surprise at the diversity and quality of the works in the collection believed to be the largest private one – with its over 6,000 pieces - in the country. Of course, the expatriates were also awed by the blend of art works with animals, birds flowers, trees that make the landscape a stunning whole. So also is the OYASAF library from which practically all Nigerian artistes can be referenced.

And from the fellow that insisted on eating pounded yam; and Bauer, who lamented that she did not see a masquerade - because her visit did not fall within the season of masquerade festival - the foreign visitors have also had a good feel of life in Nigeria. Pundits thus believe that the fellowship programme has benefited the country from tourism perspective, with artists that include Biodun Omolayo describing it as a good agent of rebranding.

In an interview with Shyllon, he affirms that the fellowship is fulfilling the agenda for which it was established.

'It's so far so good,' he says. 'In fulfilment of the objective of the fellowship, the scholars have had the opportunity to study various facets of Nigerian art and culture. They had access to artists and interacted with them. They also visited collectors, museums, galleries and higher institutions. So, we have been able to attract to Nigeria foreign art scholars who would otherwise not have come by virtue of the image our country undeservedly has. Many scholars and artists out there are petrified. They don't find our country a destination safe enough for them to visit. As a result, our artists are losing touch of development abroad, while stakeholders outside do not have the opportunity to appreciate developments here.'

The fellows variously professed that they were pleasantly surprised. The Nigeria they saw was far from being the gloomy picture especially created by foreign media. Some travelled as afar as Ile Ife, Osogbo and Benin, while one was also a guest lecturer at the Pan African University, Lagos.

'Many of them said their relatives discouraged them from coming to Nigeria, because they thought the country was one jungle where bad happenings were the norm,' Shyllon adds. 'There has been no incident at all. Some indeed confessed that Lagos is safer than New York or Johannesburg.'

Unfortunately, some of the Nigerian embassies do not help matters as they are said not to be very friendly with the fellows when seeking Nigerian visas. Indeed, one of the scholars alleged that the consular representative in one of the embassies insisted on her collecting his private phone number, since he wanted to date her as a basis for giving her visa.

Beyond such an alleged abnormality, the fellows are surprised at the vibrancy of the art scene in the country. They are also surprised at the patronage by indigenous collectors, as opposed to what obtains in other parts of Africa. Of course, Shyllon's role as a private collector was recently acknowledged when he emerged as the Art Collector of the Year at the Art Gallerries Owners Association of Nigeria maiden award.