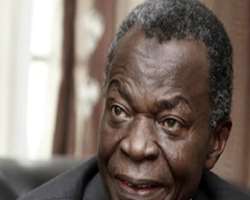 ABUJA, August 16, (THEWILL) - The President of the Court of Appeal, Justice Ayo Salami has written a letter to the National Judicial Council (NJC) to formally notify the Council of the lawsuit he filed last week seeking to quash the recommendations of the two panels set up the Council and the directive of the body.

In the letter written by the head of Justice Salami’s legal team, Chief Akinlolu Olujinmi SAN and titled: “Notification of Pendency of Court Action And Application for Injunction”, justice Salami informed the NJC of his suit and urged the Council to suspend further action on the matter concerning himself, the CJN and the Council.

“The failure to stay all actions pending the resolution of the court action will send wrong signals to the public. Thus the interest of the judiciary will be better protected if actions are stayed in relation to the subject matter of the plaintiff's suit.

“The simple question that arises at the juncture is, what is the obligation of the council in the light of this present court action? The obligation of the court is to adopt and abide with the well-established principle of law as enunciated by Tobi J. C. A. in I EZEGBU vs. FATB (1992) 1 NWLR (PT. 220) 699 @ PAGE 735 PARA A - F When he stated thus:

“The Supreme Court clearly held in Governor of Lagos State v. Chief Ojukwu {1986} 1 NWLR {Pt. 18} 621 that parties should not embark upon self-help when a matter is before a court of law. Since a successful decision nugatory, parties is aware of a pending court process, and whether the court has not given a specific injunction order, parties are bound to maintain the status quo pending the determination of the court process. They should, on no account resort to self-help,” Salami wrote in the letter.