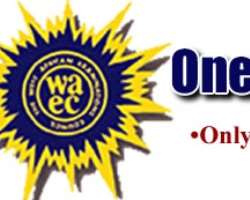 For the fourth year running candidates who wrote the May/June 2011 West African Secondary School Certificate Examination (WASSCE) conducted by the West Africa Examinations (WAEC) recorded mass failure as only 31 per cent made five credits including English Language and Mathematics.

The Head of National Office (HNO), Dr. Iyi Uwadiae disclosed the figure in Abeokuta, Ogun State while announcing the release of the school examination taken by 1, 540, 250 candidates nationwide. According to him, out of the 1, 5 million candidates who sat for the May/June, 2011 WASCE only 472, 906 candidates obtained five credits above including English Language and Mathematics.

The implication of this results he revealed was that only 31 per cent would be eligible for admissions into tertiary institutions. His words: 'The percentage of students that made five credits with English and Mathematics is better than last year. This year like other years, the candidates have not done well. The results will not be of interest to you journalists. Many of them do 'cut and paste'. For this year, 472, 906 candidates (30.99 per cent) obtained five credits above including English and others as against last year of 23 per cent.'

Uwadiae while giving further breakdown of the candidates' performance said out of the total number of candidates (1, 460, 003), representing 94.79 per cent had their results fully processed while 80, 247 candidates (5.21 per cent) also had few subjects still being processed.

He disclosed that candidates who sat for the examination would be able to check the details of their performance with their scratch cards on the WAEC's website www.waecdirect.org within the next 24 hours.

He acknowledged the contributions of the Minister of Education, Prof. Ruqayatu Rufa'i, states governors, the Inspector General of Police for the smooth conduct of the examination despite the tension in the country. Uwadiae, particularly, expressed gratitude to the Bauchi and Kaduna states Commissioner for Police for their special assistance, which, he said, enabled the council to conduct a hitch-free examination during the rescheduled gubernatorial election in the two states.

The HNO also disclosed that some of the council's staff were involved in automobile accident resulting in the death of one of them, while two others are still receiving treatment. Speaking on the efforts of the council to check examination malpractices, the WAEC boss said: 'One of our priorities over the years, is stemming the unfortunate scourge of examination malpractice to protect the sanctity of our certificates.

While further disclosing that that the council had expended so much resources and energy in the campaign, he appealed to the media and stakeholders in the education sectors to assist WAEC in waging war against examination fraud.