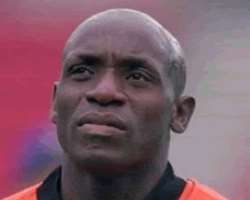 Shorunmu in a chat with Daily Sunsports at the team's camp in London, said he is looking forward to a situation where the Black Stars won't find the Eagles net.

'I have told the keepers that the only way to avoid a defeat is to ensure we don't concede a goal. I expect whoever gets the nod to start to be at his best.

In any case, I have absolute confidence in the three keepers in camp. I can beat my chest to say they will do a good job,' Shorunmu said.

Everything, however, points to first choice keeper, Vincent Enyeama, starting ahead of Isreal- based Dele Aiyenugba and home lad, Chigozie Agbim, who plies his trade with Warri Wolves.

Though, the encounter is only a friendly, the two West African neighbours are set to put everything into the game billed for the Watford Stadium.

Nigeria, it would be noted, has suffered several defeats in the hands of Ghana in the last four years, with the most humiliating being the 4-1 massacre at the

Brendford Stadium in London in 2007.
The Brendford game was watched by Nigeria's former vice president, Dr Alex Ekwueme, who after the match found it difficult leaving the arena, even as he wondered what went wrong with the Eagles.

Will the Black Stars overrun the Eagles again today? This is one question that is now on the lips of every Nigerian soccer fan as both countries go to 'war' this night in Watford at 8.30 pm Nigerian time.